Zorya Polunochnaya is one of the Old Gods, and comes from Slavic mythology. She represents the Midnight Star and has two sisters, Zorya Utrennyaya (Morning Star) and Zorya Vechernyaya (Evening Star). Together they are the Zorya.

Significance in the story[]

"The Secret of Spoons"[]

Shadow and Wednesday arrive at an apartment in Chicago. Zorya Vechernyaya tells Wednesday that Czernobog, who is currently in a field killing a cow with a bolt pistol, will not be happy to see them. She brings them into the apartment and Wednesday presents her with the vodka, romance novels, and binoculars that Shadow picked up from the store. Zorya Vechernyaya downs the entire bottle of vodka before calling for Zorya Utrennyaya to come to the kitchen. She explains that their other sister, Zorya Polunochnaya, is asleep. Wednesday passes Zorya Utrennyaya the books and sets the binoculars down in front of Zorya Polunochnaya's door.

Shadow awakens in the middle of the night in Czernobog's and the Zoryas' apartment. He discovers the living room window open and climbs out onto the fire-escape and up to the roof. Zorya Polunochnaya is star-gazing, keeping watch over Odin's Wain and the Great Bear. She explains to him that she and her sisters monitor the sky day and night to make sure the "bad thing chained up in those stars" does not escape and eat up everything. She reads Shadow's palm and says he has nothing because he believes in nothing. She asks if he sold his head to Czernobog and tells him she can help him in exchange for a kiss. They kiss and she proceeds to tell him to "take the moon." He doesn't understand what she means so she does it for him and plucks it out of the night sky. She gives it to him, telling him it is protection but not as strong as the sun protection he was given once before. She tells him to wake up.

Shadow is sleeping on the couch in Czernobog's and the Zorya sisters' apartment when he awakens from a nightmare of explosions and dying. He sees the third sister, Zorya Polunochnaya, awake and standing at the window, star-gazing. She invites Shadow to join her on the roof and he follows her out to the fire escape and up to the roof. She tells Shadow that he was given protection once before but gave it away. She will give him protection again but it won't be as strong as before and tells him to take the moon out of the sky. He doesn't understand so she does it for him and seems to pluck the moon from the sky and gives to him a silver dollar, telling him to keep this one. The next morning, Shadow wakes up to realize there is no fire escape outside the window, yet in his pocket is the silver dollar.

Shadow and Mr. Wednesday leave Czernobog's brownstone, saying goodbye to Zorya Utrennyaya. Shadow starts to do coin tricks with the coin Zorya Polunochnaya gave to him and drops it. Wednesday picks it up and gives it back to him, telling him to not be so "careless with people's gifts."

When Shadow is locked up by the Spookshow, he dreams of his mother dying while trying to tell him something important. He briefly wakes before falling back asleep, clutching his Liberty dollar. He dreams of the coin, Zorya Polunochnaya, and the moon as he rides a silver beam up to the heavens and away from the pain.

After Shadow dies on the World Tree, he enters the Underworld. There are steps in the rock and he climbs down them, wearing the same jeans and t-shirt he wore when he first encountered Zorya Polunochnaya and she gave him the moon. She is waiting for him and tells him that all his questions can be answered but they can never be unanswered. He gives her back the 1922 silver liberty dollar and she tells him it brought him liberty twice and it will now light his way before placing the silver dollar back into the sky. She tells him to choose his path among hard truths or fine lies. Shadow chooses Truth and Zorya Polunochnaya asks Shadow to pay the price with his name. She reaches up to his head and pulls out a white flame on her fingertip, closing her hand around his name. She points him to the right-handed path.

Zorya Polunochnaya is the youngest and the tallest of the three sisters. She has no wrinkles, dark eyes, long lashes, and white hair down to her waist. 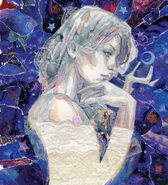 Zorya Polunochnaya in the Afterlife

Concept art of the meeting between Shadow and Zorya Polunochnaya on the rooftop, in Head Full of Snow

The Zorya, also called Zoria or Zaria (The Auroras) are Slavic mythological beings.

They were originally described as two beautiful virgins, the servants and daughters of Dažbog or Dajbog, the god of the Sun, tasked with opening and closing the gate of their father's celestial palace, allowing him to travel through the sky. As a result, they were the embodiment of Dawn and Dusk. [1]

The Zorya were later confused with the Zvezda, two sisters, also servants of Dajbog, who embodied the morning and evening stars. Like the Zoria, they were tasked with opening and closing the gates of the celestial palace for the Sun, but they also attended to Dajbog's white horses.

A later myth describeq the Zorya as rather three "little sisters", the Evening, Midnight and Morning Auroras, tasked with guarding Simargl, a winged lion or dog, trapped in the Ursa Minor (Little Bear) constellation by an iron chain attached to the star Polaris. This task was of cosmic importance, for if Simargl ended up freeing himself, it would cause the end of the world. [2] This myth is the basis Neil Gaiman used to create the character of Zorya Polunochnaya, the Midnight Star.

In Neil Gaiman’s interpretation of the Zorya sisters as a manifestation of the neopagan Triple Goddess archetype, Zorya Polunochnaya represents the Maiden, looking like a young woman, and embodying the “midnight” of existence, the beginning of life.