The World Tree or Yggdrasil is a sacred tree located on a farm in Virginia where Shadow holds vigil for nine days over Mr. Wednesday's body.

After Mr. Nancy, Czernobog, and Shadow retrieve Mr. Wednesday's body from the New Gods, they drive from the Center of America to the ASH farm in Virginia. A perfectly symmetrical silver-gray tree rises up higher than the farmhouse, identical to Wednesday's silver tie pin. There are three women of descending heights by the tree who Shadow mistakes at first for the Zorya Sisters. The tallest sister removes Wednesday's body from the bus and the three sisters place his body underneath the tree before approaching Shadow. They ask if he's the one who will mourn and hold vigil for the all-father and Shadow nods. Nancy tries again to dissuade him but Shadow holds firm. Czernobog says that Shadow needs to survive the vigil for him because he still gets to hit him on the head.

The Norns have Shadow undress before climbing nine rungs up a ladder and stepping onto a branch five feet off the ground. The women climb their own ladders up to Shadow and remove the rest of his clothing before tying him to the tree. They remove the ladders and arrange Wednesday's body at the foot of the tree and leave Shadow alone hanging on the tree.

Shadow spends the first day hanging on the tree trying to find a way to relieve the pain and the tax on his body. He recites a mantra to himself as a distraction: "It's easy, there's a trick to it, you do it or you die."

He hears a chattering and at first thinks the noise is coming from him but it is a squirrel that he eventually dubs "Ratatosk." He falls asleep sporadically, and dreams of creatures like mammoths and spiders and a giant mouse who an elephant-headed man rides on. The elephant-headed man tells Shadow he should have invoked him before the start of his journey. He performs a coin trick with the mouse (which has shrunk by this point while seemingly remaining the same size) and disappears the mouse from his hands. Shadow tells the elephant-headed man that the mouse is in his trunk and the elephant-headed man responds that he should not forget it. It rains and Shadow tries to drink the rain from the sky. As the storm grows, Shadow finds himself for the first time feeling truly alive.

The next day, the pain is spread all throughout from his flesh to his head to his hunger. A brown hawk lands on the tree before taking off again. He experiences synesthesia from his pain, seeing colors. The squirrel comes to visit him again, chattering, "Ratatosk." Shadow's life passes before him and he laughs as he remembers the Wedding March at his and Laura's wedding was the Scooby-Doo theme-song. He imagines Laura conversing with him and she tells him that she is coming and he should sleep. Ratatosk continues his chattering and brings Shadow a walnut-shell with water for him to drink.

Shadow grows delirious and becomes part of the tree. When he is thirsty, he uses his roots to pull up the waters of time from an underground spring guarded by Urd. His arms and fingers are branches and twigs, reaching to the sky and he is joined with Ratatosk and the mad-eyed hawk on his branches.

People begin to walk in and out of his mind. A bearded man with a baseball cap passes him a glass of sour wine as they walk through a Spanish-style building and converse. The man asks Shadow about the vigil on the tree, saying it can be cleansing and purifying and that Shadow is giving up his mortal existence to become a god. The stranger warns that there is a cost to be a god, whether old or new.

The morning sun brings a moment of clarity to Shadow and he sees a young, mad, naked man in the tree with him. Shadow identifies him as Horus. Horus turns into a hawk to capture a rabbit and bring it back to Shadow on the tree, offering it to him to eat. Shadow declines and Horus eats all of the rabbit, dropping the bones and fur to the ground below. Horus tells him the Old and New gods are getting ready to fight soon.

Laura comes to visit him in the moonlight. Shadow asks how she found him and she tells him that he is the closest thing she has to real life so she will always know where to find him. She offers to cut him down but he tells her to leave him because he is finally alive. Shadow tells her to go to the farmhouse and visit the Norns who will give her water. He asks her to stay the night and she stays until the moon sets. Shadow's heart stops and he enters darkness for a final time, lit by a single star.

After Laura leaves Shadow's vigil on the tree, she goes to the farmhouse to in search of water for her unquenchable thirst. Three women are seated on a couch. She tells them that Shadow said to ask them for water. The smallest of the three retrieves a jug of water for Laura before sitting back down. Laura finishes the entire jug before collapsing as the Water of Time rush over her. When she wakes up rejuvenated, she knows she has to get to Rock City.

Mr. Town drives around the back roads of Virginia searching for the Ashtree Farm. Mr. World has ordered him to cut off a stick from the World Tree but to leave Shadow alone and not turn him into a martyr. He finds the tree and takes a piss on it before grabbing a ladder and climbing up the tree. He hacks off a small branch for Mr. World and starts to climb back down. He jabs the stick at Shadow and imagines twisting it in his guts before he finishes climbing down the tree. He returns the ladder to the farmhouse and briefly imagines he sees the Norns seated there before returning to his Ford Explorer. He discovers he was up the tree for eight hours just as Shadow's side begins to bleed.

Mr. Town gets lost trying to leave the ASH farm and keeps ending up right back at the farm. He eventually spots a woman walking along the side of the road and stops to ask her for directions. Laura offers to show him and climbs in, throwing the stick from the tree into the back seat.

Easter arrives at the World Tree with Horus. They get Shadow down off the tree and Easter encourages Horus to help her warm Shadow up by flying into the sky and removing the clouds from the sun. Easter breathes into Shadow's lungs and gently kisses his face as his side wound bleeds red slightly before stopping. She tells Shadow it's time to get up and he awakens in confusion. She apologizes for bringing him back after he was done but that was what she had to do. Now it is his turn to do what he must do.

Shadow meanders about the meadow at the World Tree as he gets used to being alive again. He reflexively reaches into his pockets looking for a coin but only finds Mr. Wednesday's glass eye. He gets dressed and Easter takes him across the meadow to the thunderbird she had arrived on, telling him she is done and needs to rest. Horus tells Shadow he was the one who brought the thunderbird. Shadow climbs on the thunderbird's back and they take off off into the sky, with Shadow feeling as if he is riding lightning. 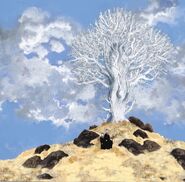