The technical boy, the fat kid

The technical boy, also called "the fat kid", is one of the New Gods, personification of computers and the Internet.

Shadow is walking back from his wife's burial when he trips and falls in a ditch right before he is captured and knocked out. He wakes up in the back of another limo, sitting across from a fat, young man. He quizzes Shadow about his work for Mr. Wednesday before telling Shadow to relay a message that Mr. Wednesday is forgotten and old while he is the future. He has "reprogrammed reality" and can "delete" Shadow any time. He takes Shadow to the Motel America and releases him.

In Los Angeles, at 2:00 a.m. on Sunset Boulevard in West Hollywood, Bilquis roams the streets, looking for johns to worship her. She has started using the internet to find dates because it's been raining recently. It's about to start raining again and as she is leaving, a white stretch limo pulls up to her. She gets in and the passenger/john is the technical boy. Bilquis lies and says her name is Ayesha and then jumps out of the limo when it starts to slow. She runs in fear, trapped between a cliff face and a hillside. The limo hits her when she's trying to climb the hillside. The technical boy gets out to taunt her before returning to the limo and she is run over again and again before the limo drives away. As she dies, she curses her murderer.

Shadow, Mr. Nancy, and Czernobog reach the Center of America and park at the one-story motel. There is a chauffeur and a female newscaster standing outside. Media introduces herself and leads them inside where the technical boy is waiting with Mr. Town. Shadow asks Mr. Town if he's slept with Mr. Wood's wife yet. Mr. Town hands room keys to Mr. Nancy who passes them out to Shadow and Czernobog.

Media calls everyone for dinner. The chauffeur has brought everyone McDonald's from Nebraska. As they eat dinner, Shadow asks when they can take Mr. Wednesday's body and is told that according to the rules, they have to wait until midnight. After dinner, the technical boy knocks on Shadow's motel room door. He wants to talk because he finds his room creepy. Shadow tells him they both need some rest and the technical boy goes back to his room where he starts screaming and throws himself against the walls.

It's soon close to midnight and everyone meets in Room Five, where Wednesday's body is laid out in the middle. Loki calls the gathering to order and asks if anyone would like to say something. Mr. Town passes, Czernobog warns that this is the start of war, and the technical boy starts to recite a poem but can't remember the rest of it. Shadow says that the whole situation is "pitiful" because half the people there had a hand in killing Wednesday but Shadow is still working for him. Media makes a few pithy comments about life and death before Mr. Nancy finishes off with another warning that the New Gods would pay for what they had done and the New Gods take their leave.

At Rock City, the technical boy roams among the New Gods, searching for Mr. World. He finds Mr. World in the Rainbow Room of Rock City. The technical boy is troubled after having killed Bilquis and asks why they need to fight the Old Gods when they can just wait around for them to die out anyway. Mr. World tells him it is because he doesn't have all the information as his mouth twists into Loki's. He explains to the technical boy that he is waiting for the stick from the World Tree so he can throw it over the battle, turning it into a spear as he dedicates the battle to Odin in order to gain power. He proceeds to show the technical boy what he means by stabbing the technical boy through his chin to his brain as he says, "I dedicate this death to Odin." He hides the body and a little while later, a voice from the shadows tells him it's a "good start."

The technical boy appears as an arrogant brat. Disdainful, prideful, self-centered, entitled and rude, flaunting his wealth and ability to "buy anything" he wants, when in a position of power he won't hesitate to threaten others or have have his "children" beat them into submission. The technical boy greatly dislikes, if not hates, the Old Gods and everything they represent, believing that they are destined to the "dumpster of history" while people " like him" deserve to be at the top and to have a future. He similarly disdains religion, considering language a "virus" and prayers "spam", believing the New Gods "reprogrammed" reality enough to erase cults and churches with technology and programming. He considers that wired Internet is "stone age" and that a place without power, Internet or a MacDonald nearby is just a worthless "dump". He is shown to have bad manners (throwing empty food bags on the ground or burping without care), and contrary to Media he refuses to make any deals or offer to the Old Gods or their allies, only able to mock and threaten them.

However, the technical boy is not cruel or malevolent. Most of his rudeness and disdain comes from a mix of ignorance, foolishness and bravado. Many people point out that what he says or does seems to have been practiced in front of a mirror beforehand, he acts nervous and shy in front of his superiors, and the narration describes him as having the shuffling walk of someone who "despite having no social skills [...] became powerful beyond his dreams". [Media/Novel| Media]] explains that he is a "good kid" but "not good with people he doesn't know", and despite all of his threats to Shadow he lets him go (relatively) unharmed. Ultimately, he even tries to talk Mr. World out of the war with the Old Gods, feeling that a battle against a dying kind is a waste of energy and effort. Despite his disdain for religion and the Old Gods, he still seems to obey the rules binding godkind, being one of the two deities insisting that Mr. Wednesday's funeral rite must take place at midnight (the other is Mr. Nancy).

It is mentionned that one of the reasons he agreed to declare war against the Old Gods was because he wants to "own tomorrow", "take the spotlight and shine", believing Mr. World's claims that eliminating the Old Gods will move the New Gods "from the slipstream to the higher ground of the mainstream" and allow them to go beyond the "credibility gap" which limits the belief in them. He is a drug-user (smoking synthetized toad skin) and has a tendency to mention random facts and trivias when talking with people (such as mentionning to Shadow the exact number of bones in his body after threatening to break them).

While the Technical Boy seems to enjoy murdering Bilquis at first, he quickly reveals that he keeps feeling "funny", "weird" and "disturbed" since - which might be as much guilt and remorse as Bilquis' dying curse. The technical boy also experiments a mental breakdown at the Center of America, shivering and speaking to himself, finding his room too "creepy" to stay in, desperately searching company, forgetting things he knew by heart, and even practicing self-harm by throwing himself against the walls of the motel while screaming what might be "It's just me" or "It's just meat". The exact reason for this breakdown is not specified, but several causes are mentionned: Mr. Nancy describes the Center of America as an anti-god area dangerous for any deities and later says that the technical boy seems to be suffering from a supernatural retaliation (a reference to Bilquis' dying curse), while the technical boy himself admits that the reason why he is so creeped out by the motel is the absence of Internet and his inability to use his powers or conjure his "children", leaving him utterly alone (something he apparently does not cope with well). The fact that he sports another red bruise on his face much latter in the story, when speaking of his strange feelings after Bilquis' murder, implies that his guilt over her death might have also taken part in his breakdown.

The technical boy is described as a fat young man barely out of his teens, puffy-faced, with a spattering of acne glistening on one of his cheeks. Dressed with a long black coat made of silky material, he tends to wear black sunglasses, even inside buildings. His eyes are described as "glinting", either with the green of an antique computer monitor, either with the copper-color of the eyes of a toad. When he is wounded, what leaks from his wound is something that is "not actually blood". Bilquis comments that he doesn't look old enough to drink, implying that his physical appearance is the one of a boy under 21 years old.

In the graphic novel adaptation, the Technical Boy is obese, acneic and blond. His pupils are green, his irises yellow and his eyelids reddened. He wears a silk dressing gown, along with socks and slippers. It should be noted that the Black Phoenix Alchemy Lab also represent the Technical Boy as blond. 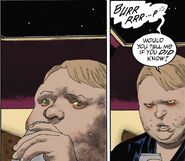 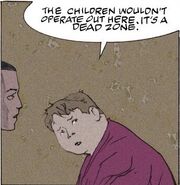 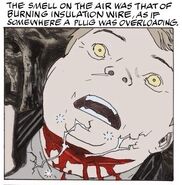 The technical boy is the god of the Internet and computers (at the turn of the millenium). As a result, he keeps using terms such as "spam", "hypertext", "virus", "synaptic" "reprogramming" or "delete" while often making cultural references or mentionning trivias. The cigarets he smokes are noted to smell like "burning electrical parts", "burning wires" and "overheating circuit boards". His body also seems to have something "electronical" to him: his eyes glow with the "green of antique computer monitor", and when wounded he bleeds "something that is not blood", there are "sputtering sparking noises" and the smell of "burning insulation wire". The technical boy's powers are tied to the Internet, he could only found Bilquis because she started using websites to find her clients. However it is also mentionned that he is powerless in areas without power or wireless range: in a "dead zone" he cannot make his children operate and starts forgetting things he knew by heart. His control of technology seems to extent to his limo, which visibly drives on its own (which might be a reference to how the United-States have been founding research and projects of self-driving cars in the 1980s and 1990s, though Bilquis compares it to Herbie the Love Bug, a franchise of comedy movies about a sentient Volkswagen racing Beetle).

Physically, he is a reflection of the stereotype of the "geek" as imagined in the 1990s, an overweight and acneic teenager. However his silky coat and black sunglasses are a reference to the movie Matrix, in which humanity has been enslaved by computers and is forced to live in a virtual cyberspace. Due to being a New God, he enjoys fast-food and synthetic things: he drinks Diet Cokes, and when taking drugs, he takes synthetized bufotenin. When burning himself with an apple-pie, he mentions a "lawsuit in waiting" against McDonald. This is probably a reference to the unfamous "McDonald's coffee case", a lawsuit against the fast-food franchise in 1994 due to an elderly woman burning herself to the third degree with a McDonald coffee - this lawsuit was then misunderstood by popular culture as an excessive lawsuit and the stereotype of entitled Americans putting everything and everyone on trials for minor offenses.

Among the cultural references the technical boy mentions, we can find: