The spooks, the black hats

The spooks, also referred to as the Spookshow by Media, are the members of the New Gods-affiliated group called The Agency, the manifestation of the belief in "men in black" and secret governemental organizations.

Members of the Agency[]

The Agency, while being a construct of belief in secret governemental organizations and the "men in black", has for agents regular human beings. They all have a life outside and before the Agency, and all were transferred to it. The members of the Agency do not seem truly aware that they are serving the New Gods. Agents like Mr. Wood think they are serving the United-States directly, while Mr. Town believes that the so-called "gods" he is serving are merely a form of mutants with hypnotic abilities. Similarly, the spooks show a complete lack of understanding in the magic and rules of the divine. However, it is clear that the spooks are not regular humans. They were carefully selected as the most fitting people to embody the archetypes that the Agency incarnates: all had previous works in governemental agencies, all have fake-sounding names designating materials or urban concepts, all seem to use the same "good cop, bad cop" technique when working in duo, and Shadow notes that the spooks are "to some level" identical, "possibly molecular".

One of the first spooks Shadow meets. Wood, or "Woody", works in duo with Mr. Stone. Wears a dark suit, a weapon strapped under his jacket and shiny black shoes. Described as having dark hair, silver-rimmed round glasses, manicured nails and a receding hairline. He plays the "good cop" of the duo, trying to be friendly with Shadow, convincing him that he would do a service to the country by turning up his "dangerous friends", offering him food and drinks. However, when Shadow still refuses to cooperate he physically attacks Shadow in ways that cause him pain without leaving any marks (kicking the knee, knuckling his fist right above Shadow's kidney). He has disdain for the CIA (which he qualifies of "bozos") and has a wife. Highly appreciated by Mr. Town (which calls him a "good man"). Ends up killed by Laura Moon.

One of the first spooks Shadow meets. He works in duo with Mr. Wood. Wears a dark suit, a weapon strapped under his jacket and shiny black shoes. Describes as having "great" dark hair, a square jaw and badly-bitten fingernails. He is said to look like someone who played football in high school. He is the "bad cop" of the duo, physically hurting Shadow and verbally threatening him so that he would cooperate. Highly appreciated by Mr. Town (who calls him a "good man"). Ends up killed by Laura Moon.

Works in duo with Mr. Town to interrogate Samantha Black Crow. Where Mr. Town plays the "good cop", he plays the "bad cop", by threatening her into cooperating.

The most prominent member of the Agency. See Mr. Town.

The head of the Agency. See Mr. World.

Shadow shuttles Old Gods from the House on the Rock to a restaurant where Wednesday will be wining and dining them. When they get to the restaurant, Shadow is stopped by someone asking for a match before he is hit over the head, restrained, and driven away in a truck.

Shadow labels his captors as the "Spooks" and they take Shadow to a tiny, sparsely furnished room where they hold him prisoner. They remove his belongings except for two quarters, which Shadow uses to entertain himself before putting them away and taking out the silver Liberty dollar to hold onto while he waited. At three in the morning, the Spooks return, asking how long Shadow has been working for Wednesday. They introduce themselves as Mr. Wood (the "bad cop") and Mr. Stone (the "good cop" with the glasses). They feed him and continue questioning him with Wood beating Shadow when Shadow only tells them what they already know. They leave him alone for a couple of hours and Shadow lays down to sleep, dreaming of his mother and Zorya Polunochnaya.

Shadow wakes up to Laura covered in blood. She killed the Spooks and helps Shadow escape from the abandoned freight train car he had been housed in. She tells him to lay low for a while and head South.

Mr. Town and Mr. Road locate Samantha Black Crow and interrogate her about her acquaintance with Shadow. She mocks them and refuses to give them any information and shuts the door in their faces. 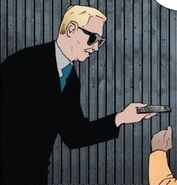 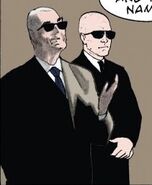 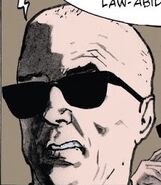 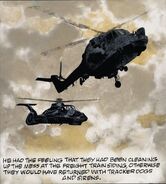