American Gods Wiki
Register
Don't have an account?
Sign In
Advertisement
in: Characters, Novel characters, Main characters, A to Z

Shadow Moon is the main protagonist and central subject of American Gods. He is a seemingly ordinary man from the Midwest, who is caught up in the war between the Old Gods and the New Gods when Mr. Wednesday hires him as a bodyguard. He is also the main character of the follow-up novella, The Monarch of the Glen, and of a short story, "Black Dog", in Trigger Warning.

Shadow Moon was born in Norway and raised by his mother in America. Shadow was a very small, bookish boy who enjoyed reading but was often bullied by his classmates until he was thirteen. Then he went through a growth spurt, becoming a big, strong man. He joined the swim team and the weightlifting team, and no one expected much of him until he met Laura.

Before the events of the story, Shadow married Laura McCabe and worked with his friend Robbie Burton at a gym called the Muscle Farm. He was arrested and imprisoned for assaulting somebody who stole from him and planned on returning to his wife and job after leaving prison where he met Low Key Lyesmith, Johnnie Larch, and Iceman. When he leaves prison, he discovers that Laura and Robbie had been having an affair and died when Laura was giving Robbie a blowjob while he was driving. On his way back to Eagle Point for Laura's funeral, Shadow meets Mr. Wednesday on a plane. Mr. Wednesday hires Shadow as a reluctant bodyguard, enlisting him in the war against the New Gods.

Shadow Moon is released early from prison to attend his wife's funeral. On his journey home, he encounters Mr. Wednesday, who offers him a job. Shadow eventually agrees to be Mr. Wednesday's bodyguard after a night of drinking with him and Mad Sweeney. Shadow attends Laura's funeral and encounters Technical Boy before returning to his motel room and discovering Laura has returned from the grave.

Mr. Wednesday takes Shadow to Chicago where they meet Czernobog and the Zorya sisters. It is Shadow who entices Czernobog to join Mr. Wednesday's cause by betting on a game of checkers. He loses the first game, allowing Czernobog to smash Shadow's head in with a hammer, but wins the second game, meaning Czernobog will have to wait until the war is over.

Shadow and Wednesday rob a bank before leaving Chicago and heading to the House on the Rock in Wisconsin, where they meet up with Czernobog and Mr. Nancy. They meet Backstage with several other Old Gods, including Alviss, Mama-ji, and the Forgettable God. Afterward, Shadow is captured and interrogated by the Spooks, and Laura returns to rescue him. Shadow travels from Wisconsin to Cairo, Illinois, where he is to find Mr. Jacquel. He buys a cheap car and spends several days driving, meeting hitchhiker Sam along the way. Shadow spends time with Mr. Ibis and Mr. Jacquel and their cat at Ibis and Jacquel Funeral Parlor. Mad Sweeney returns and reveals the importance of the coin Shadow gave to Laura.

Shadow and Mr. Wednesday leave Illinois and travel to Wisconsin. Wednesday sends Shadow to the town of Lakeside, under the guise of Mike Ainsel, where Shadow meets Hinzelmann. Shadow gets to know more about the residents and the town of Lakeside, including the Chief of Police, Chad Mulligan, and his next door neighbor, Marguerite Olsen. When a girl goes missing, Shadow aids in the search party for her.

Mr. Wednesday frequently visits and takes Shadow on trips around the US to recruit more Old Gods for the coming war, including Easter, Whiskey Jack, and John Chapman.

Laura, Samantha Black Crow, and Audrey Burton arrive in Lakeside. Audrey sees Shadow and it leads to his arrest for the murders of the two Spooks that Laura killed. While he is in the Lakeside jail, Media displays footage for Shadow of Mr. Wednesday being executed by Mr. World. Shadow is transported from jail by two deputies who turn out to be Czernobog and Mr. Nancy in disguise.

Shadow travels with Mr. Nancy and Czernobog to the Center of America to retrieve Mr. Wednesday's body from the New Gods. They take Wednesday's body to the World Tree in Virginia, and Shadow climbs onto the tree to hold the nine-day vigil for Wednesday. Horus and Laura come to visit before Shadow eventually dies and goes to the Underworld. Zorya Polunochnaya, Bast, and Mr. Ibis acts as his guides as Mr. Jacquel weighs his heart against a feather and allows him to choose his fate. Shadow asks for nothing.

Whiskey Jack retrieves Shadow from the afterlife so Easter and Horus can bring his body back from the dead. Shadow discovers that he was not a bodyguard but a distraction so Wednesday and Loki could pull off their two-man con: the war. This war between the gods would enable Odin and Loki to gain power and strength. Shadow arrives in Rock City to stop the war. He reveals to the gods it was all a con between Mr. Wednesday and Mr. World before freeing Laura from the gold coin's entrapment.

Shadow travels with Mr. Nancy to his home in Florida where they spend a night out singing karaoke. Shadow soon leaves Mr. Nancy because "the ice is melting". Shadow returns to Lakeside to uncover Hinzelmann's centuries old secret, leading to Chad Mulligan shooting and killing Hinzelmann. Shadow checks up on Sam and leaves her flowers before proceeding to Chicago, where he visits the Zoryas and Czernobog to fulfill his end of the checkers game and allow Czernobog to hit him over the head with his hammer. Shadow takes off to Europe and travels around for a while, stopping off in Iceland where he encounters the Old World version of Mr. Wednesday and returns his glass eye to him.

Monarch of the Glen[]

After the events chronicled in American Gods, Shadow travels around Europe, including his birthplace in Norway, then goes to Scotland, where he is tricked into fighting an ancient monster.

In the short story "Black Dog" in Trigger Warning, Shadow spends time in England with a couple and their ghosts.

Various characters question Shadow's race, the ambiguity of which contributes to a later revelation. Gaiman has confirmed that Shadow's mother is black. Shadow is thirty-two years old at the start of the novel. He was "big enough and looked don't-fuck-with-me enough" to keep out of trouble while in prison. Shadow's eyes are described as gray in color.

Despite his hulking appearance, Shadow is actually well-read and insightful, a result of growing up as a small boy who spent most of his time reading. He is typically very blunt and has a sharp sense of wit, often following up a rude comment or foolish question with a snarky response. Despite this, he manages his reactions based on his surroundings, knowing when to hold his tongue. Shadow is also a person with a somewhat strong moral compass, contrasting his thuggish appearance and background; while he is not opposed to working with unlawful people, he will typically try to do what he believes is the right thing. 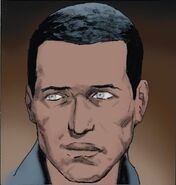 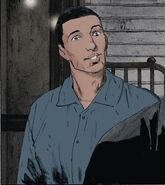 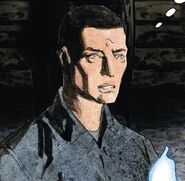 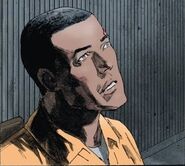 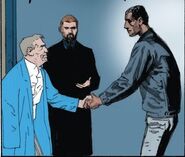 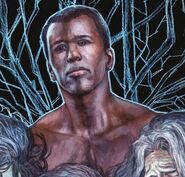 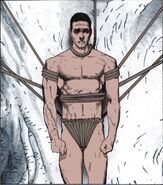 Shadow tied to the World Tree