Mr. World is the leader of the New Gods.

When Shadow and Mr. Wednesday travel Backstage to escape from the Spooks tailing them, Shadow accidentally touches a thigh bone. He is transported into one of the Spooks' (Mr. Town's) head. Town calls Mr. World to tell him they lost Shadow and Wednesday. He is angry because he thinks Shadow is the one who killed Mr. Wood and Mr. Stone back at the railroad car. Shadow recognizes Mr. World's voice from somewhere, but can't place it. Mr. World complains about scheduling a policy meeting and tells Town to get back there and that they can try to get Shadow and Wednesday again later.

After Shadow is arrested in Lakeside for the murder of Woody and Stone, there is a television on in the police station. Media gets Shadow's attention as Diane from Cheers begins to show him a "LIVE FEED" with Mr. Town outside a building. The feed changes to inside the building and Wednesday is there, talking to a person with his back to the camera who turns out to be Mr. World. As Wednesday is arguing with Mr. World, a red laser dot appears on his glass eye. There is a bang and his head explodes. Media replays Wednesday's assassination and freeze-frames it for Shadow.

Mr. Town approaches Shadow and hands him Wednesday's glass eye, telling him that Mr. World wanted Shadow to have it.

Mr. Town drives around the back roads of Virginia searching for the Ashtree Farm. Mr. World has ordered him to cut off a stick from the World Tree but to leave Shadow alone and not turn him into a martyr. He hacks off a small branch for Mr. World and starts to climb back down. He jabs the stick at Shadow and imagines twisting it in his guts before he finishes climbing down the tree. As he leaves, Shadow's side begins to bleed black.

Technical Boy is at Rock City searching for Mr. World, eventually finding him in the Rainbow Room. Technical Boy is troubled after having killed Bilquis and asks why they need to fight the Old Gods when they can just wait around for them to die out anyway. Mr. World tells him it is because he doesn't have all the information as his mouth twists into Loki's. He explains to Technical Boy that he is waiting for the stick from the World Tree so he can throw it over the battle, turning it into a spear as he dedicates the battle to Odin in order to gain power. He proceeds to show Technical Boy what he means by stabbing Technical Boy through his chin to his brain as he says, "I dedicate this death to Odin." He hides the body and a little while later, a voice from the shadows tells him it's a "good start."

Laura takes the stick from Mr. Town's car and heads through Rock City unimpeded, reaching a cavern in an off limits part of the attraction. Mr. World welcomes Laura for bringing him his spear. When she tells him she is Shadow's wife, he comments that she is looking better than she should. He warns her that drinking from Urd's Well is only temporary and asks for his stick. Laura asks him for a cigarette and answers before she will give him his stick. He tells her Shadow was a distraction and it's all about patterns and symbols. She asks him what side he is on and Mr. World says, "the winning side." She turns away from him, briefly glimpsing out the window the skirmish below, as Mr. World approaches her from behind.

Laura waits until Mr. World is close behind her and touching her before she takes his stick and says, "I dedicate this death to Shadow," and rams it through her chest and into Mr. World behind her. They are stuck together on the stick and Mr. World takes out a knife and starts stabbing her in the chest before she knocks it out of his hand. He flails about, trying to free himself as he cries and wails before they both fall down.

Shadow arrives in Rock City and finds Mr. Town dead in his car from a broken neck. He catches Laura's scent in the air and follows it, feeling a brief moment of pain in his side. He hears a man call out something, only capturing, "...to Odin!" and begins to hurry through the seemingly abandoned park. He finds the off-limits cave and hears Mr. Wednesday speaking to him from behind. He tells Shadow that he was the misdirect and did everything he was supposed to do. He is proud of Shadow because the power in the sacrifice of a son was enough to "get the whole ball rolling." Without turning around, Shadow tells him it was all a crooked setup for a massacre before asking where Laura and Mr. World are. Mr. Wednesday doesn't answer.

Shadow walks further into the cave and encounters Mr. World, propped up against a cage with a blanket over him. Mr. World tells Shadow he is too late and he has thrown the spear and dedicated the battle to Odin. Shadow tells him he figured out the two-man fiddle con but didn't realize Low Key and Mr. World were the same. He demands Mr. Wednesday to show himself, who can't because he is a ghost. It is Wednesday's death that drew all the gods together for their blood sacrifice. Loki and Wednesday plotted a massacre of gods because Wednesday feeds on death that is dedicated to him, like Shadow's death on the tree, whereas Loki feeds on chaos. Wednesday needed a son to die for him and finally tracked down Shadow, locked away in prison. They had orchestrated everything to get Shadow to play the part of the fiddle in their con. Shadow asks what caused Loki's fatal injuries and Wednesday tells him it was Laura but the war will bring Loki back just as it will bring back Wednesday.

Shadow leaves to find Laura and wonders at the emptiness of Rock City before realizing the battle is being fought Backstage. He shifts his perspective and sees the "moment of the storm" with the Old and New Gods readying themselves for the oncoming war. He enters the center of the arena and hears the Buffalo Man's voice encouraging him. Shadow tells the gods that it's not a war and wasn't intended to be a war. He exposes Wednesday's and Loki's plan to con the gods in a game of "Let's You and Him Fight." The winning and losing don't matter because only the deaths matter since that is what gives Loki and Wednesday their power. Shadow finishes up by saying he'd rather be human than a god because humans keep going regardless of whether or not anyone believes in them. The Old and New gods begin disbanding, realizing they've been had.

Shadow returns to the cavern in search of Laura, finding her bleeding all over the floor of the cave where she stabbed Loki. He tells her he stopped the war from happening and that she successfully killed Mr. World. 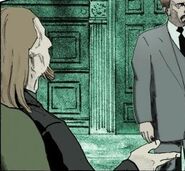 Mr. World negociating with Mr. Wednesday
Add a photo to this gallery

Retrieved from "https://americangods.fandom.com/wiki/Mr._World/Novel?oldid=15319"
Community content is available under CC-BY-SA unless otherwise noted.