Mr. Wednesday is the leader of the Old Gods in their war against the New Gods. He is Odin, the All-Father and most prominent god of the Norse pantheon, god of wisdom. In America, he works as a con artist. He meets Shadow on an airplane after Shadow's release from prison and hires him on as a bodyguard.

Mr. Wednesday is responsible for recruiting gods to help fight his war. He hires Shadow to help him as well as be a bodyguard. The gods he recruits include Mr. Nancy, Czernobog, Easter, and Mama-ji. He is often unsuccessful in recruiting gods who claim to be happy in the amount of worship they are currently getting. It is Mr. Wednesday who arranges for Shadow's home in Lakeside under the name Mike Ainsel, and his relationship with Shadow is responsible for the bulk of the events in the narrative. Toward the end of the book, it is revealed that the entire plot was a two-man con between Wednesday and Loki, with Shadow acting as a distraction. His son, Thor, is only briefly mentioned in the book as having killed himself in Philadelphia in 1932.

Shadow Moon is released from prison early to attend his wife's funeral. On his journey home, he encounters Mr. Wednesday who offers him a job. Shadow eventually agrees to be Mr. Wednesday's bodyguard after a night of drinking with him and Mad Sweeney.

Mr. Wednesday takes Shadow to Chicago where they meet Czernobog and the Zorya sisters. It is Shadow who entices Czernobog to join Mr. Wednesday's cause by betting on a game of checkers. He loses the first game, allowing Czernobog to smash Shadow's head in with a hammer but wins the second game, meaning Czernobog will have to wait until the war is over.

Shadow and Wednesday rob a bank before leaving Chicago and heading to the House on the Rock in Wisconsin where they meet up with Czernobog and Mr. Nancy. They meet Backstage with several other Old Gods, including the forgettable god, Alviss, and Mama-ji, as Wednesday tries to convince them to go to war against the New Gods. After Shadow is captured by the Spooks and escapes with Laura's help, Wednesday sends him to Ibis and Jacquel Funeral Parlor to lay low for a while.

Shadow and Mr. Wednesday leave Illinois and travel to Wisconsin. Wednesday sends Shadow to the town of Lakeside under the guise of Mike Ainsel. Mr. Wednesday frequently visits and takes Shadow on trips around the US to recruit more Old Gods for the coming war, including Easter, Whiskey Jack, and John Chapman.

Mr. Wednesday meets on his own with the leader of the New Gods, Mr. World, and is assassinated.

Shadow travels with Mr. Nancy and Czernobog to the Center of America to retrieve Mr. Wednesday's body from the New Gods. They take Wednesday's body to the World Tree in Virgina and Shadow climbs onto the tree to hold the nine-day vigil for Wednesday.

Mr. World kills Technical Boy and dedicates his death to Odin, starting the process to bring Mr. Wednesday back from the dead. Shadow discovers that he was in fact not a bodyguard, but a distraction so Wednesday and Loki could pull off their two-man con: the war. This war would arrange for Odin and Loki to gain power and strength. Shadow arrives in Rock City to stop the war. He reveals to the gods it was all a con between Mr. Wednesday and Mr. World and the gods disband.

Shadow visits Iceland where he encounters the Old World version of Mr. Wednesday and returns his glass eye to him.

Mr. Wednesday is first introduced as a man with grayish-red hair and a stubbly beard that matched. He has mismatched eyes, one of which is glass. He is smaller than Shadow but seems to take up more room with a "craggy, square face with pale gray eyes." 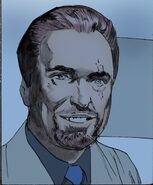 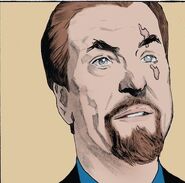 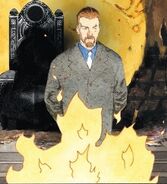 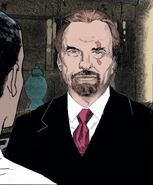 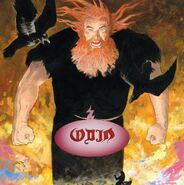 Mr. Wednesday as Odin in the Backstage 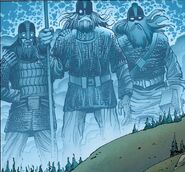 Odin's arrival to America, alongside Tyr and Thor 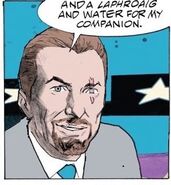 Odin in the Backstage

Odin, also known as Woden, Wotan or Waotan, is one of the main gods of Norse mythology.

Son of Borr (son of the first god Buri) and of Bestla (daughter of a jötunn), Odin was responsible for the creation of the world as we know it alongside his two brothers, Vili and Vé. Together they killed the primordial jötunn, Ymir, and used his corpse to form the universe - his flesh becoming the earth, his bones the mountains, his brain the clouds and the maggots eating his carcass the dwarves. When they murdered Ymir, the blood flowing from the giant's body drowned almost all of the other jötunn, resulting in their species becoming fierce ennemies of the gods. Odin and his brothers also created the first humans: Vé gave them faces and five senses, Vili gave them mobility and intelligence/consciousness, while Odin gave them life and minds. Finally, the three brothers created together Asgard, the realm of the gods and one of the nine worlds of Norse cosmogony. [1]

Odin is the leader of the main family of Norse gods, the Aesir, a clan of civilization, war and craft-related deities living in Asgard. As a result, Odin was considered a god of roylaty and nobility, as well as the god of war. Men often prayed to him in order to obtain victory in battle, but since Odin enjoyed deeply feuds they knew he could easily give victory to the opposite side, not caring about fairness or justice but rather about the quality of the fight. It was said that Odin started the war between the Aesir and the Vanir (the second clan of gods, associated with nature, fertility and weather) by throwing his spear at a Vanir living among the Aesir. One of his domains in Asgard was Valhöll or Walhalla (the "halls of the slained ones"), a paradise-like afterlife for those that died in battle or while fighting. These dead would become the einherjar, the elite warriors of Odin's personal army, spending their time fighting each other (but healing and resurecting each evening) and feasting on never-ending supplies of meat and food. This afterlife was so sought by the Norsemen that some warriors who failed to die at war were known to kill themselves with their own spears to become einherjar. [2]

Odin is known to be married to Frigg, a beautiful and graceful goddess of foresight and wisdom, but he had numerous love affairs with goddesses, female jötunn and mortal women, resulting in the birth of numerous gods of the Aesir pantheon: Thor, Baldur, Tyr, Heimdall, Ull... Usually appearing as a grey-haired and bearded old man wearing a large hat and a blue cloak, he liked to travel through Midgard (the world of humans) as a simple mortal, to either test people's hospitality or seduce women (many Norsemen liked to claim they descended from Odin to give themselves a higher social status). Odin owned several fabulous treasures, which included Gungnir, a spear that never misses nor stop until it reaches its target, Draupnir, a gold ring that produces every nine nights eight replicas of itself, and Sleipnir, an eight-legged horse as fast as lightning and able to run across water or through the air. [3]

Odin was also known as a spiritual god. He was the god of poetry, guardian of the mead of poetry (that he stole through trickery, transformation and seduction from the dwarves who created it) and able to gift both gods and men with inspiration or the talent to write or sing. He was a god of wisdom: not only did he sacrificed one of his eyes to drink from Mimir's well, whose magic waters made him knowledgeable and wise, but he also hanged himself from one of the branches of Yggdrasil, the World-Tree, with his own spear piercing his torso, for nine days and nine nights, as a sacrifice to himself. This particular operation, on top of making him the god of gallows and hanged men, and confering him even more wisdom, helped him invent the runes, a form of primitive alphabet used to cast spells. Indeed, Odin was also the god of magic, recognized as a seer and a wizard. He was the master of seidr, a form of ritualistic magic able to shape fate for good, neutral and negative purpose, and which allowed him to see or know the future and curse his ennemies with death, sickness or bad luck. It should be noted that the seidr was seen as a female practice, and considered dishonorable for a man to practice as it would be a cowardly form of cheat (Norsemen were encouraged to fight in more honest and virtuous ways, with weapons or their physical strength). Due to his strong association with the death (god of the slained warriors, god of the gallows) Odin was also a practicioner of what would be called today necromancy known as the "lord of the ghosts": he could resurrect the dead (especially if they had been hanged) and enchanted Mimir's cut head so it would keep speaking even without a body. [4]

Odin had an impressive collection of powers through his knowledge of seidr, runes and other forms of magic. Some of his abilities included turning enemies blind, deaf, paralyzed or mad, taking numerous shapes, stopping arrows through mid-air, turning warriors into invulnerable beings, or letting his mind travel through the world under the shape of an animal while his original body stayed in a form of trance. In the Germanic tradition, Odin was the leader of the Wild Hunt (Wodans Jagd), a celestial and supernatural hunt through the sky that manifested itself as violent storms. Odin does not need to eat, merely to drink wine: all of the meat that is served to him is actually given to his two wolves, Freki and Geri, always sitting at his feet. Another defining trait of Odin is his omniscience: when he sits on his throne, Hlidskialf, he can see the nine worlds all at once, and every morning his two crows, Huginn (Thought) and Muninn (Memory) leave Asgard to explore the other worlds, coming back in the evening to tell the Aesir lord everything that happened in the universe. [5]

While recognized as a wise, generous, brave and powerful god, Odin was also said to be prideful, cunning, selfish, cruel and a trickster. In fact, he was considered to be the most frightening of all of the gods, humans dreading him greatly. It is said that at Ragnarök, the end of times, he will lead the Aesir, Vanir and einherjar into battle against the forces seeking to destroy the universe, and die swallowed alive by Fenrir, the giant wolf. [6]

The important and ancient character of this deity can be noted through his names: experts have currently collected more than 170 names and nicknames given to the gods (his most common being "All-Father", a title representing his role as the creator of the world, gods and humans). While the Romans identified him with the god of Mercury, many have pointed out that his role would be more similar to the one of Jupiter. The word Wednesday derives from Odin's Germanic name Woden (Wodnesdaeg, the day of Woden - for originally, Wednesday was dies Mercurii, the day of Mercury). [7]