Prosector for the county Medical Examiner

"A Prayer for Mad Sweeney"

Mr. Jacquel is one of the Old Gods and a supporting character in American Gods

In Queens, Mrs. Fadil cooks dinner for visiting family when there is a knock on the door. Anubis enters and explains to Mrs. Fadil that she has died and he has come to take her to the Afterlife because of her belief in her Tita's stories. She follows him to her fire escape and up a seemingly never-ending staircase until they reach a sandy desert. They sit down in front of his scales and he places a large feather on the right scale. He removes her heart and places it on the left scale to see if she used her heart well. Mrs. Fadil tells him she tried her best and Anubis replies that her best is good. He leads her to five pillars, each of which will lead to one of the many worlds of the Du'at, and tells her to choose. She tells him he is kind and asks him to choose for her. He points to the center pillar and a door opens. Mrs. Fadil pauses at the entrance expressing momentary doubt, and her cat pushes her through the doorway anyway.

After Laura Moon dies, she is transported to the Underworld and Anubis appears. Anubis explains that she is now dead and leads her to his scales. He places a feather on one scale and reaches for her heart. Laura slaps his hand away and pushes down the scales as she tells him that her heart is heavier than the feather. Anubis leads her to her hot tub and tells her she will go to darkness because she believed in nothing. She starts to argue but he tells her he won't even remember her just as she is yanked out of the afterlife.

A black jackal and Mr. Ibis stand in the middle of the road, stopping Audrey's car. The jackal stands up into Anubis, telling Laura that he remembers her. Jacquel and Ibis take Laura to their funeral parlor. Ibis explains they have been in business for 200 years. They repair her with pins and threads and paint her skin. Jacquel asks if it was love that brought her back. She says it wasn't but it is now. Jacquel lets her know that when she is done, he will complete his task and deliver her into darkness.

Mr. Jacquel puts on a jazz record as he begins his mortician work on a corpse at Ibis and Jacquel Funeral Parlor. Mr. Ibis enters the room, bringing Irish red ale for them to drink at the end of the workday. Mr. Jacquel wants to finish his work because he knows they will have two more bodies coming the next day. He sends Ibis away because Ibis "has a story to tell." Mr. Ibis begins writing when the phone rings to announce the two new bodies. As Jacquel answers the phone, Ibis continues writing his story about criminals being transported to the Americas as indentured servants.

In his human form, Mr. Jacquel is described as having darker skin than Mr. Ibis and is "a very tall dark-skinned man." In "Git Gone," he also appears as a long-muzzled, black dog with high, pointed ears.

Mr. Jacquel is a psychopomp god, whose function is to escort the newly deceased to the afterlife - more precisely the Duat, the Egyptian afterlife. It seems that he only guides those who in life had a relationship to the Egyptian gods - from Mrs. Fadil in Head Full of Snow, who was of Egyptian descent, to Laura in Git Gone, who worked in an Ancient Egypt-themed casino.

As a death-related god, Mr. Jacquel can sense when people die. In A Prayer for Mad Sweeney he can thus predict to Mr. Ibis that their funeral parlor will receive two more bodies.

Anubis being a jackal-god, Mr. Jacquel can abandon his human form to turn into a black jackal (as seen in Git Gone). 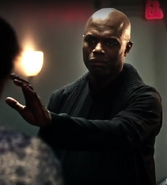 Mr. Jacquel is American Gods ' version of the god Anubis. Anubis was one of the main and more popular gods of the Egyptian mythology, as well as a divinity associated with death and the afterlife.

His birth is quite unclear: some versions claim he was the son of Osiris, lord of the underworld, and thus associate him with the figure of Horus. Other think he was the son of Bast, the cat-goddess. The most popular and well known version of the myth describes Anubis as the illegitimate son of Osiris and his sister-in-law Nephtys, the wife of Seth. Nephtys, trying to protect her son from her husband's wrath, hid Anubis in a swamp where he was later found by Isis who, being childless at the time, decided to raise him as her own to become her faithful guardian and companion. [1]

Later, when Osiris was murdered and mutilated by his brother Seth, Anubis put back together the pieces of his corpse to allow him to be resurrected by Isis and Nephtys, creating in the process the first mummy. This myth explains why Anubis is the god of the embalmers, nicknamed "he of the bandages". The processus of mummification practiced by the Egyptians on their dead, believed to be the key to eternal life, was merely a repetition and an imitation of Anubis' work on Osiris' corpse. In fact, the ones to practice this mummification were the priests of Anubis, wearing a costume representing their god to do their work.

Anubis was said to be the protector of the dead. As the "lord of the necropolis", he protected the tumbs and the "city of the dead". He also welcomed the recently deceased at the door of the Amenti, the underworld, and protected them from all dangers and harms until they reached the palace of Osiris, lord of the afterlife.

Once before Osiris, the defuncts are judged and put on trial for the sins of their life. Their heart is taken and weighed on a scale against a Maât (the embodiment of truth, good and virtue, usually represented as a feather). If their heart weighs more than the Maât, they'll be condemned to destruction, their essence devoured by a dreadful monster. If not, then they'll have access to a peaceful afterlife. Opinions disagree on Anubis role in the trial: some say he is the one responible for weighing the heart of the dead and the mediator between the judged deceased and the judge-gods [2], while others think he had no role in the trial and merely acted as the guardian and guide of the soul from the door of the Amenti to Osiris' courthouse. [3]

If a dead also desired to go back to the world of the living, they needed to inform Anubis of their project and ask him for his authorization, because only a decree of Anubis could allow such a thing to happen.

"Anubis" isn't the actual deity's name. Despite being know as such today, "Anubis" is the name the Greek gave to this psychopomp, who was known in Egypt as "Inpou" (a word meaning "young dog" or "young being"). [4] The god is usually represented as a black canine, or a man with a black canine head. While in popular culture this animal is considered a jackal, in truth it seems it was rather a representation of a type of wild, feral dog close to wolves and jackals (or, according to more modern researches, of an Egyptian wolf). The black coloration of Anubis was a reference to the tar used in the mummification process [5]. Wolves and wild dogs were often found in the desertic surroundings of the necropolis, feeding of the carrions, thus the Egyptians turned them into divinities protecting the dead. There were many of those canine death gods, such as Oupouaout in Assiout or Khentamentiou in Abydos, but they all stayed minor and local gods, overshadowed and then assimilated by the very popular Anubis, who was worshipped in all the main religious centers of Egypt, from Thebes to Memphis.

Numerous clues seem to indicate that Anubis used to be the god of the Egyptian afterlife and the ruler of the dead before the rise in popularity of Osiris during the Middle Kingdom, such as representations of him with the sekhem scepter, or the flagellum, a symbol of authority. Due to being the one tasked with opening the gates of the Underworld, he was also often seen with a key (in his hand in humanoid form, around his neck in canine shape). [6]. When it became an habit to associate each god with a wife and a child to create a divine trinity, Anubis was considered to be the husband of the goddess Anput, a female counterpart of Anubis, and the serpent-goddess Kebechet, embodiment of the embalming liquid.

His main sanctuary (and probably where his worship started) was in the city of Assiout, later renamed by the Greeks Cynopolis, "the city of dogs". During the Ptolemaic period, during which Egypt became an Hellenistic kingdom, Anubis was associated with the Greek psychopomp god Hermes, becoming the god Hermanubis. He was also associated with other Greek concepts such as the Sirius star, the Hades and Cerberus.

Anubis regained a fame through popular culture, being misidentified as a sinister and evil god of death in medias such as video games, television series, movies or cartoons. [7].

Retrieved from "https://americangods.fandom.com/wiki/Mr._Jacquel/Series?oldid=16237"
Community content is available under CC-BY-SA unless otherwise noted.