Mr. Ibis is one of the Old Gods, and a supporting character in American Gods. He runs Ibis and Jacquel Funeral Parlor with his partner, Mr. Jacquel. Mr. Ibis is also the author of some of the Coming to America stories told throughout the novel.

When Shadow first arrives in Cairo, IL, he meets a cat (Bast), a talking dog (Mr. Jacquel), and a man in gold-rimmed spectacles (Mr. Ibis) who take him to Ibis and Jacquel family funeral parlor.

They let Shadow stay with them and do some work for them as they owe Wednesday a favor. Shadow has lunch with Ibis, who explains that most funeral homes are large corporations, because they make more profit. However, in order to appeal to the public, they keep the name and employees of the smaller funeral homes they purchase. Mr Ibis then reveals that he and Jacquel come from Ancient Egypt. He was brought over by the people of the Nile when they came up the Mississippi to trade, and left them behind. Ibis explains that advanced peoples from all over the world had been coming to America long before Columbus.

Shadow watches Mr. Jacquel as he performs an autopsy on a murdered young girl. He does it professionally and slowly, but eats small pieces of her heart, liver, and kidney as he is performing the procedure. Ibis asks Shadow if he minds sleeping under the same roof as corpses, and Shadow responds that it's fine as long as they stay dead. Ibis explains that it's very difficult to bring the dead back to life in their bodies, but that it used to be easier in ancient Egypt.

Ibis and Jacquel host a service for Lila Goodchild and they ask Shadow to pick up a body the police phoned about. When Shadow arrives at the site, he sees Mad Sweeney frozen with a twenty-dollar bottle of whiskey in his lap. Back at the funeral home, Mr. Goodchild continues to complain how his children won’t come to pay their respects, repeating “the apple doesn’t fall far from the tree”.

That night, Shadow, Ibis, and Jacquel set an extra place on the table and pour everyone expensive Irish whisky. Ibis tells Mad Sweeney's story: he was made to protect a precious stone in Ireland, and was brought to America by a young Irish girl looking for a place to make money. They all get drunk to the point that Sweeney starts adding to the conversation and Sweeney reminds Shadow how to do the coin trick: you take the coin out of nowhere, out of the hoard, and out of your mind.

When Shadow is arrested by Mulligan in Lakeside, he lets Shadow use his phone and Shadow calls Ibis and Jacquel Funeral Parlor. Mr. Ibis answers and Shadow asks him to track down Wednesday. Bast comes on the phone next and tells him to take care. Ibis tells Shadow he can't get a hold of Wednesday but he left a message with Mr. Nancy and wishes him luck.

As Shadow journeys through the Underworld, a splashing noise reaches him in the darkness. He waits on the shore as Mr. Ibis rows a boat over. As they row back to the other side, Ibis tells Shadow he is his psychopomp, there to escort him from the world of the living to the world of the dead. Even though Shadow didn't believe in the Egyptian gods, they believed in him and are now there to guide him on his way.

They disembark and Ibis takes Shadow to Anubis to be dissected and judged, leaving Shadow feeling painfully exposed as all of his sins are examined. Anubis asks for Shadow's heart and Bast passes it to Ibis. If Shadow's heart is too heavy, it will be fed to Ammet, the Eater of Souls. Anubis brings out a pair of golden scales and places a feather on one side and Shadow's heart on the other as Ammet lurks in the shadows, waiting. The scale balances out and Shadow is allowed to choose where to go next. Shadow asks for no heaven or hell but to simply rest and let it end. Mr. Jacquel opens a door to Nothing for Shadow and he walks through joyously.

Mr. Ibis is the author of some of the Coming to America stories told throughout the novel.

Mr. Ibis writes in his journal about how many of the early immigrants to America were indentured servants and deported criminals. He recounts the tale of Essie Tregowan from Cornwall who was a con artist, thief, and prostitute.

Mr. Ibis tells the tale of a girl, Wututu, and her twin brother, Agasu, whose uncle sold them into slavery.

Ibis is tall and thin with a small bird's head on a long neck with a long and high beak.

In his human form, he is described as "a cranelike man with gold-rimmed spectacles" and is "well over six feet in height, with a cranelike stoop".

Mr. Ibis
Add a photo to this gallery 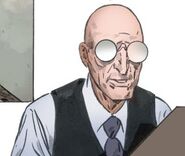 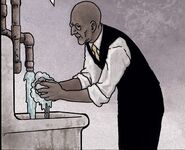 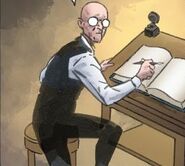 Mr. Ibis is the American Gods version of Thoth, or Thot, a god from Egyptian mythology.

Myths don't agree on how he came to be. The Hermopolitan cosmogony claims that Thoth was the original demiurge, existing before all of the other gods, the chief of the primordial divine Ogdoad and the one responsible for the creation of the world (to no surprise, the nome of Hermopolis is where Thoth's cult began). Other texts and legends rather refer to him as the son of Rê/Ra, the Sun God, either born from Rê and the goddess Neith, either manifesting out of Ra's heart during a moment of sadness. Another myth rather claims that he is the son of Seth: during the feud between Seth and Horus, Horus, to humiliate his uncle Seth, put his sperm into Seth's favorite food, a salad. Seth gulped it without looking twice, and from this fecundation was born Thoth, who sprang out of Seth's cranium.

God of intelligence and science, keeper of knowledge, he was highly considered by the other gods. Being the vizir to Ra's pharaoh he was the divine clerk present in every tribunal, from being the arbitrator settling divine disputes (such as the conflict between Seth and Horus) to being the scribe noting down the results of the weighing of hearts in the afterlife. He was considered the patron of sciences and scribes. [1] According to mythology, he created the language, the writing, the geometry, the mathematics, the weights and the measurements, not only as a way to spread knowledge to the mortal beings but also to organize the world itself. As the inventor of writing, it was considered that most, if not all, of the sacred texts had been written by him and then left on Earth for the humans to use. He was said to have been behind the delimitation of Egypt into nomes and the creation of its geographical fronteers. It was also said he was the one to offer the art of architecture to humans. Finally, Thoth was a god of knowledge in its most esoteric form, being known as a healing god of medecine, and as a god of magic and astronomy. [2]

However legends explain that, while Thoth was respected and admired by his peers, he was still a very boring, annoying and prideful god, the other divinities finding his long, complex, flowery and pompous speeches irritating. (A famous sentence was said by Isis when Thot, asked for a cure to save a dying Horus, started a long speech full of digressions: "Thoth, how you are wise of heart, but slow to decide!"). [3]

The other major role of Thoth was to be the moon in the night sky. When Ra, the Sun God, decided to leave the mortal, earthly realm he started his eternal travel, going through the sky during the day and passing through the underworld at night. Since he had to abandon earth to the darkness half of the time, Rê asked Thoth, his faithful advisor, to spread light during night, thus making Thoth the god of the moon.[4]

As a god of measurements, calculations and the moon, he was strongly associated with calendars. A myth even explains how he shaped the modern 365 day calendar. Indeed a year used to be only 360 days long, but Nut the Sky-Goddess was cursed by her father Shu to not be able to give birth to her children during any day of the year. Thoth, wishing to help her, gambled with Iah, a moon god, over a game of "senet" (a popular Egyptian board game), and won portions of Iah's light, that he used to create five additional days during which Nut could give birth to her five children.

Thoth's association with the afterlife went further than him assisting in the trial of the dead. If a dead was judged worthy of accessing Osiris' realm, Thoth, alongside Anubis, was the one charged with giving the dead a "new breath" so that he may begin his new life in the underworld. [5]

Thot usually appeared as an ibis or a man with an ibis head but he could also appear as a baboon or a man with a baboon head. These two animals are actually strong symbols of Thoth's functions: the ibis' beak was associated with the scribes calam, especially when it "wrote signs" while the bird was searching in the earth for food, while the baboon was associated with the cult of the Sun and the light because of how it screams at sunrise. [6]. When it became an habit to associate each god of the Egyptian religion with a wife and a child in order to create a divine triad, Thot became the husband of the goddess Nehmetawy (or Nehemet Aouaï, goddess of law and justice) and the father of the god Hornefer. Other legends claim that Thoth's wife was rather the goddess Seshat, "She who writes", a divinity protecting books and libraries, guardian of the divine archives recording the different rules of the Pharaohs. [7]

Thoth was a very popular god in Egypt, with numerous temples dedicated to him. He was also very popular in foreign lands, such as Nubia and Sudan. His cult included several oracles. The Ancient Greeks identified him with the god Hermes, due to both Thoth and Hermes being associated with intelligence, science and language. This fusion later gave birth to the figure of Hermes Trismegistus. In popular culture Thoth knew a great fame ever since the 20th century. Aleister Crowley created the "Thoth Tarot" or "Book of Thoth" in 1944, a tarot card game inspired by the god. Socrate's "Myth of Theuth", an allegory reflecting on the relationship between writing and memory, science and truth, was reused by the philosopher Jacques Derrida to prove the instability of Truth, and how writing is both a poison and a cure. Finally the current logo of the Cairo University, the oldest university in Egypt, is Thoth sitting on a throne. [8]

Retrieved from "https://americangods.fandom.com/wiki/Mr._Ibis/Novel?oldid=15477"
Community content is available under CC-BY-SA unless otherwise noted.