Media is one of the New Gods and a personification of television.

After dropping Sam off at her aunt's house in El Paso, Illinois, Shadow rents a room at a Night's Inn and has the TV on in the background to fall asleep. I Love Lucy comes on the TV and Lucy begins talking to him. She explains that she is the television god and invites him to work for her instead, but Shadow turns her down, deciding to stay with Wednesday.

While in Cairo, Illinois, Shadow and Jacquel go to the house of an elderly deceased woman named Lila Goodchild. Her husband is poor and upset, and he complains that their children have shown no respect for their parents. Meanwhile, Shadow takes away the body and learns how to work the hearse and the gurney. He sees the TV god again, winking at him from the image of a newscaster on the television screen.

When Shadow is arrested in Lakeside, he is left handcuffed and waiting for the county sheriffs to pick him up. There is a television on in the background while the office guarding him, Officer Bute, takes a nap. Media gets Shadow's attention as Diane from Cheers and begins to show him a "LIVE FEED" with Mr. Town outside a building. The feed changes to inside the building and Wednesday is there, talking to a person with his back to the camera who turns out to be Mr. World. As Wednesday is arguing with Mr. World, a red laser dot appears on his glass eye. There is a bang and his head explodes. Media replays Wednesday's assassination and freeze-frames it for Shadow.

Shadow, Czernobog, and Mr. Nancy reach the Center of America and park at the one-story motel. There is a chauffeur and a female newscaster standing outside. Media introduces herself and leads them inside where Technical Boy is waiting with Mr. Town. Shadow asks Mr. Town if he's slept with Mr. Wood's wife yet. Mr. Town hands room keys to Mr. Nancy who passes them out to Shadow and Czernobog. Shadow heads to his room and falls asleep.

Media calls Shadow for dinner and he walks out to find the chauffeur has brought everyone McDonald's from Nebraska. As they eat dinner, Shadow asks when they can take Mr. Wednesday's body and is told that according to the rules, they have to wait until midnight. After dinner, Shadow finds Media waiting for him in his room. She tries to convince him to join her side and when he refuses, she threatens to make his life bad. She leaves him alone.

It's soon close to midnight so everyone meets in Room Five, where Wednesday's body is laid out. Loki calls the gathering to order and asks if anyone would like to say something. Mr. Town passes, Czernobog warns that this is the start of war, and Technical Boy begins to recite a poem buy can't remember the rest of it. Shadow says that the whole situation is "pitiful" because half the people there had a hand in killing Wednesday but Shadow is still working for Wednesday. Media makes a few pithy comments about life and death before Mr. Nancy finishes off with another warning that the New Gods would pay for what they had done.

Media presents herself as an affable, kind and compassionate entity. Seemingly friendly and caring, she acts politely even towards the Old Gods and tries to win Shadow over to her side through promises, gentleness and seduction. However, this is all a carefully-crafted facade. Media often subtly implies or hide insults in her words, acting in a very passive-aggressive manner (she respects freedom of belief and freedom of speech, but adds that it also implies "the freedom of believing in the wrong things" and "the freedom to stay silent"). She also ultimately takes very badly Shadow rejecting her offers of power and fame, resulting in her threatening him very aggressively and promising him a ruined and miserable life.

Media shows the same arrogance and pride as all of the other New Gods, boasting about her worship and divine nature to Shadow, and disdaining the Old Gods that she sees as weak and irrelevant. Media has an habit of using cliches, broad banalities and irrelevant generalities, reflecting how much of an insincere hypocrite she truly is (at the wake of Mr. Wednesday, she tries to swipe away the horror of the New Gods' crime by speaking of how for each death there is a new life born, and of how sorrow and joy go together like "milk and cookies"). Media is also shown to be a very materialistic goddess, thinking that sex and money would easily "buy" Shadow.

Media also has a darker side, showing a fascination and enjoyment for violence and misery. She turned an episode of The Dick Van Dyke show into a depiction of real-life abuse seemingly just to attract Shadow's attention and show him her powers, she jokes about people committing murder in her name, she admires how Shadow "dealt" with the Spookshow (aka killing most of them brutally) and, when broadcasting the murder of Mr. Wednesday, she replays the scene with a zoom-in and audible delight. This dark side is reinforced by Mr. Nancy's comparison to the Greek sorceress Medea, who was known to commit atrocious acts to obtain what she desired, and did not shy away from killing her own brother or children.

Media, during most of the book, manifests through televisions, taking the appearance of several different people and characters. She first appears to Shadow Moon as Lucy Ricardo, from I Love Lucy. In Cairo, she appears as a newscaster, and while in Lakeside police station Shadow sees her take the shape of several characters from Cheers (including Diane, Cliff and Carla).

She only appeared once outside of a television. During Mr. Wednesday's funerals, at the Center of America, she appeared as a perfectly made-up and perfectly coiffed woman, reminding Shadow of a newscaster on morning television.

Media is the goddess of television, identifying herself with a series of slangs and terms used to define televisions: the idiot box (a slang refering how television was considered to make people idiots or gather idiots as its audience), the all-seeing eye (probably a nod to the telescreen from George Orwell's 1984), the world of the cathode ray (cathode ray tubes or CRTs being used for televisions from the 1930s to the turn of millenium, when LCD panels were favored for the creation of televisions) and the boob tube (a US slang for a television set denouncing all the sexuality and pornography on television).

Media shows a great favoritism towards sitcoms, which is an iconic American television genre.

When welcoming the Old Gods at the Center of America, she mentions the Four Seasons Hotels and Resorts, a luxury hotel company headquartered in Toronto. In 1997, Four Seasons Hotel Austin became the first hotel to be equipped of a high-speed wireless Internet network. When trying to convince Shadow to join the side of the New Gods, she offers him to become as famous as Gary Grant (one of Hollywood's leading men, who became a star in 1937) or the Beattles (an English rock band considered the most influential band of all time), and threatens him with making people believe he is the next Manson (the cult leader of the Manson Family who became a symbol of insanity and violence in American popular culture) or Hitler (the leader of Nazi Germany, responsible for the massive genocides of World War II and remembered as one of the worst humans beings to have ever existed and the embodiment of political evil). When first meeting her, Czernobog mistakes Media for Medea, a sorceress of Greek mythology who was madly in love with the hero Jason and helped him in his adventures: she helped Jason steal the Golden Fleece from her father, killed her own brother to prevent her father from following them, and later got rid of Jason's evil uncle by tricking his own daughters into slaughtering him. When Jason rejected her for the love of another woman, she burned said woman to death and murdered the children she had with Jason. She then fled to Athens and married its king, before trying to poison his legitimate heir to obtain dominion over the kingdom. To this mistake, Mr. Nancy answers "Different woman. Same deal." 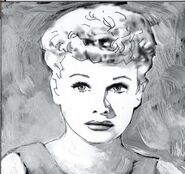 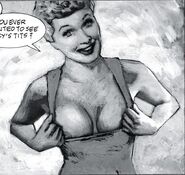 Media at the Center of America 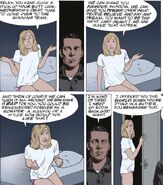