Marguerite Olsen is a reporter for the Lakeside News. Her eldest son, Sandy, vanished the winter before, believed to have been kidnapped by her ex-husband. She is Shadow's next-door neighbor in Lakeside where she lives with her other son, Leon.

Marge met Darren Olsen at U.W. Stevens Point and married before returning to Lakeside around 13-14 years prior. Darren managed the Motel America in Camden before it closed. He drained their bank account in ten weeks and Marge divorced him, causing a custody battle. He returned every few months to cause trouble and then leave again before the last year when he said he wanted to take his sons to Florida for Christmas. Two weeks later, Sandy vanished.

Missy Gunther chats with Shadow about the people in the town of Lakeside and his new neighbor, Marguerite Olsen and her son, Leon. Shadow returns home and Hinzelmann comes to drop off a welcome basket and shares stories with Shadow about the area and tales about his childhood. After he leaves, Shadow heads next door to ask his neighbor, Marge Olsen, about how to keep his apartment warmer.

Shadow heads to the library to research his dream about eagle stones and thunderbirds. While there, he runs into Leon and Marguerite Olsen who tells him to visit the library sale. He buys three books for a dollar, including the Minutes of the Lakeside City Council 1872--1884. Shadow arrives back at his apartment where Chad Mulligan offers him a ride. They chat about Marge Olsen. Mulligan tells Shadow how Marge's oldest son, Sandy, vanished last year and was most likely kidnapped by his father.

Shadow heads outside his apartment and whispers to the lake his raffle ticket time (March 23rd, 9:15 am). Marguerite Olsen tells him it's going to be April 3rd, 6:00 pm. They chat briefly about the still-missing Alison McGovern, who Marge hopes is dead because the alternative would be worse, making Shadow realize she was thinking of her own missing son, Sandy.

Marguerite Olsen calls her half-sister, Samantha Black Crow, and they discuss Marge's new neighbor, Mike Ainsel. Sam decides to come to Lakeside for a visit and tells her to invite the new neighbor for dinner.

Marge invites Shadow to her place for spaghetti and meatballs at six. Shadow agrees to dinner and heads into town, buying a potted plant and a bottle of wine. Shadow arrives at Marge's for dinner shortly before Marge's half-sister, Sam, returns from the store. Shadow and Sam pretend to not know each other while they sit down to dinner and Sam shares stories about their family. After dinner, while Marge puts Leon to bed, Sam takes Shadow to the Buck Stops Here.

Shadow and Mulligan discover that Hinzelmann has been killing children, including Marge's son, Sandy, and hiding their bodies in the annual klunkers on the ice for over a hundred years. After Hinzelmann's death, Shadow helps Mulligan start a fire to cover it up before Mulligan drives Shadow back to his car at the lake. Shadow removes Mulligan's memories of the day and nudges him romantically toward Marguerite Olsen. 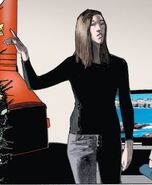 Add a photo to this gallery
Retrieved from "https://americangods.fandom.com/wiki/Marguerite_Olsen/Novel?oldid=15101"
Community content is available under CC-BY-SA unless otherwise noted.