Mama-ji is Kali, one of the Old Gods, and a character in American Gods.

Mama-ji attends the meeting of the Old Gods in Valaskjalf, Odin's old hall, in Wednesday's mind. Wednesday is upset that there aren't as many people waiting for them in the hall as he expected. Mr. Nancy steps up as the "warm-up" man and tells the crowd of Old Gods a story about how he stole Tiger's balls and blamed it on Old Monkey, which is why to this day, Tiger chases monkeys. Wednesday next stands before the people gathered. He gives them a speech about how the New Gods are growing in America and it is now time for the Old Gods to act.

Mama-ji gets into an argument with Wednesday, saying they only have to wait for the New Gods to die out like the ones of the past. Wednesday tells them all they have already lost everything and he is offering them the change to take something back. The fire burns out and the meeting ends.

Afterward, Shadow drives Mama-ji and two other gods to the restaurant where Wednesday will be wining and dining them. Mama-ji asks Shadow what he thinks of Wednesday's plans and Shadow tells her it's not his job to ask questions.

At Rock City, Czernobog, Anansi, Kali, and many others continue to gather for the war between the Old Gods and the New Gods.

Mama-ji is described as an old woman with dark skin and salt-and-pepper hair. She has a blue jewel on her forehead and a necklace of tiny silver skulls and a charm bracelet of heads and hands. She wears a red sari and smelled of spices and flowers.

Mama-Ji
Add a photo to this gallery 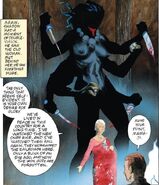 Retrieved from "https://americangods.fandom.com/wiki/Mama-ji/Novel?oldid=15399"
Community content is available under CC-BY-SA unless otherwise noted.