American Gods Wiki
Register
Don't have an account?
Sign In
Advertisement
in: Characters, Novel characters, Main characters, A to Z

Shadow met Laura through his best friend, Robbie Burton, who was dating Laura's best friend, Audrey. She was a travel agent and visited Shadow in prison as much as she was able, also buying him a plane ticket to return home when he got out.

Shadow attends Laura's viewing and burial, dropping a gold coin he received from Mad Sweeney into her grave, which brings Laura back from the dead. The night of her funeral, Shadow wakes, noticing it's 1:03 am, and goes to the bathroom. When he returns to the bedroom, he sees Laura sitting on the edge of the bed. He tells her she is dead and confronts her about her affair with Robbie. She asks him to get her cigarettes, so Shadow goes to the front desk and buys some.

When he returns, Laura explains to him how she and Robbie started their affair after a drunken night thirteen months after Shadow was locked away and continued it on over the past two years. She was breaking it off with Robbie because Shadow was coming home and was giving Robbie one last blowjob when they got into the accident. She tells Shadow she's watching out for him and thanks him for her present: the gold coin from Mad Sweeney that Shadow dropped into her grave. She kisses him goodbye and tells him he will one day ask her to stay "before all this is over." She exits the motel, leaving a trail of mud behind her.

Shadow wakes up to Laura covered in blood. She killed the guards who were holding him hostage and helps Shadow escape from the abandoned freight train car he had been housed in. She tells him to lay low for a while and head South. Shadow asks Laura what she wants and Laura tells him she wants to be really alive again, asking him to make it happen. She leaves and Shadow starts walking south.

One morning while in Lakeside, Shadow goes on a scenic walk east on Country Q that Mabel recommended and encounters a cat who hisses at something behind him. He comes upon a graveyard and wanders through the tombstones when Laura arrives. Laura is continuing to decay and the cold bothers her so she was headed into Texas when she received a "call" to find Shadow. She realizes it wasn't Shadow who called her because it hurts too much for him to see her. Laura proceeds to tell him he's never really lived and it's why she was drawn to Robbie Burton, who was alive and filled the space. They eventually say goodbye with Laura telling Shadow she will see him "in the end."

Laura applies for the "zombie shift" at a gas station in Florida, telling the hiring manager that she doesn't look well because she has a medical condition.

During Shadow's vigil on the World Tree, Laura comes to visit him in the moonlight. Shadow asks how she found him and she tells him that he is the closest thing she has to real life so she will always know where to find him. She offers to cut him down but he tells her to leave him because he is finally alive. Shadow tells her to go to the farmhouse and visit the Norns who will give her water. He asks her to stay the night and she stays until the moon sets.

After Laura leaves Shadow's vigil on the tree, she goes to the farmhouse in search of water for her unquenchable thirst. Three women are seated on a couch. She tells them that Shadow said to ask them for water. The smallest of the three retrieves a jug of water for Laura and sits back down. Laura finishes the entire jug before collapsing as the Water of Time rush over her. When she wakes up rejuvenated, she knows she has to get to Rock City.

Mr. Town gets lost trying to leave the ASH farm and keeps ending up right back at the farm. He eventually spots a woman walking along the side of the road and stops to ask her for directions. Laura offers to show him and climbs in, throwing the stick from the tree into the back seat.

Laura and Mr. Town continue their drive from the World Tree, superficially discussing a variety of topics, including her husband and his fallen coworkers. They pass a sign for Rock City and Mr. Town tells Laura that is where he is heading. She decides to accompany him to have an adventure. Town fancies himself in love with her and tells her he will pay for her room for the night. They reach Rock City and he asks her to wait in the car while he delivers the stick in the backseat to his boss. Laura asks him for a hug before he leaves and, as he comes in close, she asks him if he wants to know what really happened to Woody and Stone.

Laura takes the stick from Mr. Town's car and heads through Rock City unimpeded, reaching a cavern in an off limits part of the attraction. Mr. World welcomes Laura for bringing him his spear. When she tells him she is Shadow's wife, he comments that she is looking better than she should. He warns her that drinking from Urd's Well is only temporary and asks for his stick. Laura asks him for a cigarette and answers before she will give him his stick. He tells her Shadow was a distraction and it's all about patterns and symbols. She asks him what side he is on and Mr. World says, "the winning side." She turns away from him, briefly glimpsing out the window the skirmish below, as Mr. World approaches her from behind.

Laura waits until Mr. World is close behind her and touching her before she takes his stick and says, "I dedicate this death to Shadow," and rams it through her chest and into Mr. World behind her. They are stuck together on the stick and Mr. World takes out a knife and starts stabbing her in the chest before she knocks it out of his hand. He flails about, trying to free himself as he cries and wails before they both fall down.

After Shadow stops the war between the Old Gods and New Gods, he returns to the cavern in search of Laura, finding her bleeding all over the floor of the cave where she stabbed Loki. He tells her he stopped the war from happening and that she successfully killed Mr. World. She asks if he ever found a way to bring her back from the dead and he tells her he found one way. She says she thinks she has earned the opposite of that, meaning death. Shadow concurs and takes the gold coin from around her neck and disappears it. Laura is finally truly dead and Shadow kisses her cheek before walking back out into the night.

She has chestnut brown hair and blue eyes and is in the process of decaying throughout the novel. 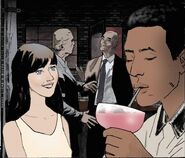 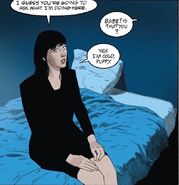 Laura, back from the dead 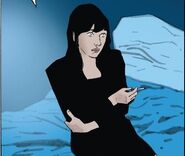 Laura's advanced decay in My Ainsel