John Chapman is one of the culture heroes of American history who Shadow first encounters when he and Wednesday escape Mr. Town by going Backstage.

Wednesday and Shadow arrive at Whiskey Jack's mobile home after leaving Backstage and encounter Whiskey Jack and John Chapman. They eat dinner while they discuss the oncoming war between the Old Gods and the New Gods with both Chapman and Whiskey Jack refusing to join either side.

Whiskey Jack starts talking to Shadow about death and Shadow's dreams and Thunderbirds. Whiskey Jack brings up Laura's not-dead state and the Buffalo and offers to help when Shadow finds his "tribe." Whiskey Jack then offers to trade his nephew's '81 Buick for Wednesday's Winnebago they left Backstage. As Chapman leaves with Shadow and Wednesday, Whiskey Jack tells Wednesday to never come back.

They walk into town and find Harry Bluejay at the rec hall and get the keys for the Buick. They drop Chapman off in Sioux Falls before stopping at a restaurant outside St. Paul.

John Chapman has bark-colored skin and wears stained buckskins and bare feet. He has bad teeth and a stubbly chin. 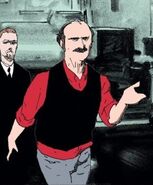 Retrieved from "https://americangods.fandom.com/wiki/John_Chapman?oldid=15096"
Community content is available under CC-BY-SA unless otherwise noted.