Ibis and Jacquel Funeral Parlor is a location in American Gods where Mr. Ibis, Mr. Jacquel, and Bast reside. Mr. Ibis is also the author of some of the Coming to America stories told throughout the novel and series.

When Shadow first arrives in Cairo, he meets a cat, a talking dog, and a man in gold-rimmed spectacles who take him to Ibis and Jacquel Funeral Parlor.

Shadow meets Mr. Ibis and Mr. Jacquel, who own a local funeral home in Cairo, Illinois. They let him stay with them and do some work for them as they owe Wednesday a favor. Ibis who explains that most funeral homes are large corporations because they make more profit. In order to appeal to the public, however, they keep the name and employees of the smaller funeral homes they purchase.

Shadow watches Mr. Jacquel as he performs an autopsy on a murdered young girl. He does it professionally and slowly, but respectfully eats small pieces of her heart, liver, and kidney as he is performing the procedure. Ibis asks Shadow if he minds sleeping under the same roof as corpses and Shadow responds that it's fine as long as they stay dead. Ibis explains that it's very difficult to bring the dead back to life in their bodies, but that it used to be easier in ancient Egypt.

When Shadow is arrested by Mulligan in Lakeside, he lets Shadow use his phone and Shadow calls Ibis and Jacquel Funeral Parlor. Mr. Ibis answers and Shadow asks him to track down Wednesday. Bast comes on the phone next and tells him to take care. Ibis tells Shadow he can't get a hold of Wednesday but he left a message with Mr. Nancy and wishes him luck.

Mr. Ibis writes a story of Vikings coming to America long ago and bringing Odin with them.

"The Secret of Spoons" Edit

Mr. Ibis writes a story of a Dutch slave ship and the shackled people within its hold who pray to Anansi to save them.

Audrey drives Laura around so they can find Shadow. A black jackal and Mr. Ibis stand in the middle of the road, stopping Audrey's car. The jackal stands up into Anubis, telling Laura that he remembers her. Jacquel and Ibis take Laura to their funeral parlor. Ibis explains they have been in business for 200 years. They repair her with pins and threads and paint her skin. Jacquel asks if it was love that brought her back. She says it wasn't but it is now. Jacquel lets her know that when she is done, he will complete his task and deliver her into darkness.

Mr. Ibis narrates a story about the first immigrants who crossed over the land bridge from Siberia to North America.

"A Murder of Gods" Edit

Mr. Ibis writes about a coyote leading a group of people across the US-Mexico border.

A Prayer for Mad Sweeney Edit

Mr. Jacquel puts on a jazz record as he begins his mortician work on a corpse at Ibis and Jacquel Funeral Parlor. Mr. Ibis enters the room, bringing Irish red ale for them to drink at the end of the workday. Mr. Jacquel wants to finish his work because he knows they will have two more bodies coming the next day. He sends Ibis away because Ibis "has a story to tell." Mr. Ibis begins writing when the phone rings to announce the two new bodies. As Jacquel answers the phone, Ibis continues writing his story about criminals being transported to the Americas as indentured servants. He tells how hundreds of years prior, Mad Sweeney approached the porch of a former indentured servant, Essie MacGowan of Ireland. 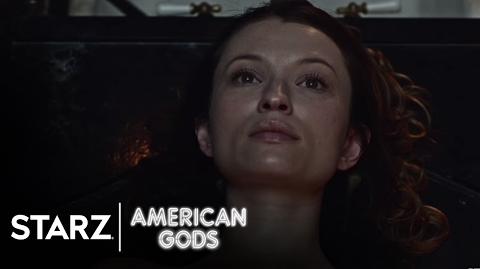 Retrieved from "https://americangods.fandom.com/wiki/Ibis_and_Jacquel_Funeral_Parlor?oldid=15409"
Community content is available under CC-BY-SA unless otherwise noted.