Richie Hinzelmann is is the first person Shadow meets when he arrives in Lakeside, Wisconsin. Hinzelmann helps Shadow get adjusted to life in Lakeside and frequently tells Shadow stories about the town, often involving mystical properties of ice.

Hinzelmann came to Lakeside from the Black Forest in Germany in the 1800s. He keeps the town safe from economic and other problems in exchange for an annual sacrifice.

When Shadow first arrives in Lakeside, he meets Richie Hinzelmann, who offers him a ride in Tessie, his antique Wendt Phoenix roadster. Hinzelmann tells Shadow about the town of Lakeside and invites him to join in the town's annual raffle of predicting the date and time when a specific vehicle on the frozen lake will break through the ice, signaling the end of winter.

Hinzelmann comes to Shadow's apartment to drop off a welcome basket. He shares stories with Shadow about the area and tales about his childhood.

Shadow hangs out with Hinzelmann, who sells him raffle tickets for the klunker on the ice. Shadow buys the time slot for March 23 from 9:00 a.m. to 9:25 a.m. He asks Hinzelmann what he knows about eagle stones and thunderbirds, and Hinzelmann tells him to check the library.

Shadow stops at Mabel's for lunch and Mabel tells him Hinzelmann wants to go ice-fishing with him. Later, while Shadow is reading from the Minutes of the Lakeside City Council, he discovers that one of Hinzelmann's ancestors had helped create the lake around Lakeside that gave the town its name. He also reads about how kids went missing from the area every winter dating back to the late 1800s.

Shadow arrives in Lakeside and drives directly to the Lake, where he goes out on the ice to the klunker parked there. He uses the antenna to pick the lock on the car and pries the frozen door open to release the trunk. He sees Alison McGovern's body in the trunk and tries to get her out, causing the ice to break and sending Shadow and the car into the water at 9:10 am on March 23 (the same time frame on his raffle ticket).

Shadow finds himself trapped under the ice and discovers that the bodies of all the missing kids over the last hundred or so years are down at the bottom of the lake. He tries to find his way out from under the still-frozen ice and is soon pulled free. He sees Whiskey Jack and the Buffalo Man walking away before he loses consciousness.

He awakes in a bathtub in Hinzelmann's house as Hinzelmann helps Shadow warm up from his hypothermia. Shadow soon realizes it was Hinzelmann who has been killing the kids all those years and asks him why he saved Shadow's life. Hinzelmann tells him it's because he owed Wednesday. Hinzelmann's defense of the annual child sacrifices is that he kept Lakeside safe and kept Shadow safe for Wednesday. Shadow accuses him of betraying Wednesday by earlier beckoning Laura, Sam, and Audrey to the town.

Hinzelmann rails at Shadow, telling him that he was once a god before he became a kobold with hundreds of children sacrificed to him. Then he reveals himself to be a five-year-old child that had been stabbed with swords, a feral child that had once been sacrificed, preserved, and worshiped in the Black Forest.

Chad Mulligan reveals he's been listening to the entire conversation for the last ten minutes. Hinzelmann panics and throws a red hot poker at Mulligan as he tries to flee, with Mulligan shooting him dead in one shot. Shadow helps Mulligan start a fire to cover Hinzelmann's death before Mulligan drives Shadow back to his car at the lake. Shadow removes Mulligan's memories of the day and nudges him toward Marguerite Olsen.

Hinzelmann
Add a photo to this gallery 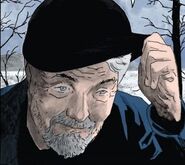 Retrieved from "https://americangods.fandom.com/wiki/Hinzelmann/Novel?oldid=15420"
Community content is available under CC-BY-SA unless otherwise noted.