The Forgettable God, the Unknown God, the Forgotten God, The Man in the Charcoal Suit

The Forgettable God, Forgotten God or the Unknown God, is a mysterious Old God that no mortal seems to be able to remember. Left unnamed in the novel, Neil Gaiman never answered who the Forgettable God's exact identity was, wishing to keep it a mystery.

When returning from the House on the Rock, Shadow drives some gods to a restaurant. Among them are Mama-Ji, a man he thinks is named Elvis, and the Forgettable God. Shadow, no matter how much he looks at him or talks to him, can't remember what is his appearance, what his voice sounds like or even what he talked about.

Mr. Wednesday visits the Forgettable God in Las Vegas. Shadow still cannot seem to remember anything about the god, including his name. In Vegas, the god follows around briefcases full of cash as Wednesday and Shadow follow him in a taxi. Wednesday corners him in a bar and asks him if he's in the war against the New Gods and the god ultimately says yes for some Soma. Wednesday later explains to Shadow that Soma is like bottled prayers and love for the gods.

No mortal seems to be able to remember the Forgettable's God appearance. After Shadow met him, he couldn't remember his face, his appearance or the sound of his voice. The narration describes him as a dark-haired and dark-eyed man, clean-shaved and with well-manicured hands. He is seen in Las Vegas wearing a charcoal-gray immaculate suit, and it is mentionned that his face and demeanor are "in every sense, forgettable".

The main ability of the Forgettable God is that no mortal seems to remember him in any way. Usually, no one can remember his name, face, appearance or the sound of his voice the second they stop laying their eyes on him. It seems that this ability works in a stronger way on normal human beings, who forget even the God's presence - the workers of the casino's counting room in Chapter Ten completely ignoring the fact that he is in the room with them. Shadow, when driving him in Chapter Six knows he is present in the car and has a conversation with him, but can't remember what the man looks like or what they talked about. Is only left "an impression of wealth". The Forgettable God can use this to his favor, and is able to leave subliminal messages by merely speaking to humans: when they will forget his existence, their subconscious will still remember the advice or order given (such as the waitress in Chapter Ten). It seems this ability also works indirectly - no matter how many times Mr. Wednesday tells Shadow the Forgottable God's name, he keeps forgetting it or being distracted while the name is said. The Forgettable God isn't seen interacting with the other gods in the cars while driving out of the House on the Rock, but he is seen having a full conversation with Mr. Wednesday at Las Vegas. As a result it is unknown is all the gods are immune to his "forgettableness" or if Mr. Wednesday has a special resistence to it, due to owning a charm that allows him to know the name of all the gods.

The Forgettable God is also strongly associated with wealth and money, and seems to have abilities related to these domains: it is mentionned he can "see" and "feel" the flow and movements of money in Las Vegas as a "fine latticework, a three dimensional cat's cradle of light and motion". He is also able to follow these "golden threads" and study the "matrix" in order to determine immediate events in the futur related to money, or where money will go - as a result he could tell a waitress that if she was at a certain place at a certain time she would meet a man who recently won a huge sum of money and was in need of a "mentor", advices and guidance on how to use and spend this money.

The Forgettable God
Add a photo to this gallery

The Forgettable God in Las Vegas 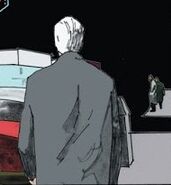 Due to this god's identity being kept a mystery, many theories were made about the deity's cultural background - in fact, the Forgettable God may be the biggest mystery of the entire American Gods world. Neil Gaiman, as he explains on his website's FAQ, had planned to reveal the god's identity to the fans, due to the amount of people asking him questions about it, but then he decided not to, after receiving a "heartfelt plea" begging for the mystery of the character to be kept. [1]. Neil Gaiman still reveals some information about the Forgettable God from time to time:

On top of the elements mentionned previously, here are additional traits of the God mentionned in the novel and used in theories:

Here is a list of the theories about the Forgotten God's identity:

Retrieved from "https://americangods.fandom.com/wiki/Forgettable_God?oldid=15808"
Community content is available under CC-BY-SA unless otherwise noted.