Easter is one of the Old Gods who Mr. Wednesday and Shadow visit to recruit.

Eostre or Ostara, also known Easter is the Germanic Goddess of the dawn, springtime, fertility of the earth, prosperity, growth, the harvest, renewal and rebirth

Wednesday leads Shadow inside a Kentucky mansion where a banquet is laid out for Easter Sunday. The guests are decked out in holiday costumes and Shadow sees a Madonna nursing a baby Jesus. Wednesday points out Ostara to Shadow, the queen they've come to enlist.

Shadow is in awe of Ostara and escorts her around the grounds of her estate. Wednesday tries swaying her to his side but she insists she's doing fine without his help. Wednesday argues that millions might observe some of the rituals of Easter but not many actually speak her name in worship. Ostara does all the work of bringing spring, yet Jesus gets all the prayers. Jesus feels bad for stealing Ostara's day and Ostara tries to comfort him before she drags Wednesday and Shadow inside to speak in private.

She is angry that Wednesday has insulted Jesus, especially on their shared day. Wednesday insists that it is her day, not theirs. He lies to her that the New Gods killed Vulcan and presents to her the sword Vulcan crafted for him. He promises her she will be worshiped if she makes them worship her. Wednesday suggests to Ostara that she should take away the spring to make the people pray to her. A rabbit whispers into Ostara's ear and she hurriedly leaves Wednesday alone.

Easter finds Laura in a bathroom, coughing up maggots. Easter is angry Mad Sweeney brought a dead girl into her home but she owes Sweeney a favor. Easter quizzes Laura on her dead state. Laura admits that she is always thirsty and cold. Easter explains she doesn't resurrect, she grants "relife" but first she needs to know the specifics of Laura's death. She looks into Laura's eyes to see the exact moment of death and spots a raven and Mad Sweeney as the last image on Laura's retinas. Easter asks Sweeney if he was working for Wednesday and explains to Laura that she was killed by a god, making it so she can't regift life to Laura. A rabbit alerts Easter that more guests have arrived and she leaves.

Easter opens the door to greet Hannah Brown (Judy Garland from Easter Parade) and one of the Children dressed as Don Hewes (Fred Astaire). Hannah reminds Ostara of their tradition of celebrating Easter together, having merged pagan beliefs into media gimmicks, like peeps and bunnies and brunch. Easter guides her outside to meet her sheep.

Shadow rejoins Wednesday as Wednesday spots Hannah and Easter strolling the grounds outside. Hannah asks about Wednesday and Easter admits he was trying to recruit her. The faceless Don begins to split into multiple Dons as Hannah questions Easter. The New Gods make Old Gods new again and she wants to know why Easter would listen to Wednesday. Easter replies that it is because she is feeling "misrepresented in the media." Hannah explains that the Old Gods have to evolve in order to survive in an atheist world.

Mr. Wednesday arrives as the Children circle protectively around Easter and Hannah. He argues with Hannah about the distribution methods of worship. Technical Boy takes over one of the Children and enters the conversation, warning Wednesday that he can't fight progress. Wednesday points out the New Gods wouldn't be there if he wasn't a threat. Hannah claims they are there for Easter because Wednesday doesn't matter anymore. Wednesday insists he still matters because gods make things happen to cause belief.

Mr. World takes over another one of the Children. As Mr. World speaks, storm clouds gather above. He tells Wednesday that he only matters when it comes to war and there isn't going to be a war. The New Gods have all the advanced technology while the Old Gods are left with swords and hammers. Whether they fight or not makes no difference because the Old Gods will die out either way. Wednesday responds by dedicating deaths to Ostara just as lightning strikes the circle of Children, killing them all.

Wednesday turns to Shadow and asks if he has faith. Shadow asks for a third time for Wednesday to tell him who he is. Wednesday recites some of his many names to Shadow before finally revealing himself to be Odin. He commands Ostara to show the New Gods who she really is. Easter steps forward and lifts her arms to the air, bringing a change in the wind and clearing the thunderclouds. She takes away the spring, causing life to retreat underground throughout the country as it returns to its winter state.

Mr. World tells Wednesday he has his war. Wednesday announces the believers and non-believers can have their spring back when they pray for it. He asks Shadow if he believes and Shadow answers that he believes "everything." Laura clears her throat to announce her presence and asks to speak with her husband.

Kristin Chenoweth described Easter as "just a little pissed-off that Jesus stepped on her holiday, but she is definitively willing to share it" and has nothing against Jesus. Kristin Chenoweth compares it to showbusiness, when an actor or singer is forced to share the stage and the spotlight with someone they did not choose. [1]

Easter is the goddess and embodiment of spring, fertility, renewal and nature. As a result, she controls the weather, the plant life and the fertility of the ground. Each Easter celebration, she brought spring to the land, giving back energy, warmth and fecundity to the world after winter. She is also able to do the reverse, as seen in Come to Jesus, when she "takes back the spring", plunging the entirety of the local vegetation in a winter-like state (trees barren and dead, crops returned to the ground). These powers are coupled with her role as a goddess of the dawn - when she uses her abilities, a great and brilliant light fills the sky (dawn being a symbol for spring and rebirth, the light after the night equal with the warmth after the winter and the life after death).

As the goddess of renewal and rebirth of nature and the world, Easter (as explained in Come to Jesus) can resurrect the dead. However, it is also precised that Easter cannot give back life to someone who was killed by a god.

Easter also has for "minions" numerous white rabbits, with which she can talk to and that act as spies for her (her sacred animals being the rabbit and hare). 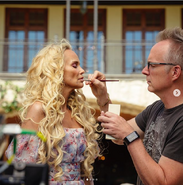 Add a photo to this gallery
Video

Retrieved from "https://americangods.fandom.com/wiki/Easter/Series?oldid=16555"
Community content is available under CC-BY-SA unless otherwise noted.