Czernobog is one of the Old Gods, and comes from Slavic mythology. He claims often that he misses his brother, Bielebog, but at some point he states that he is not sure if both are actually the same person.

Mr. Wednesday and Shadow arrive at an apartment in Chicago where Czernobog answers the door. Zorya Utrennyaya sends them into the sitting room while she gets them coffee. Czernobog begins relating his past job in the meat business and how he was a "knocker" on the kill floor, taking a sledgehammer to knock the cows dead before slitting their throats and draining their blood. Zorya Utrennyaya returns with their coffee and Shadow excuses himself to the bathroom.

They start playing checkers and Czernobog wagers Shadow that if he wins, he gets to hit Shadow on the head with a sledgehammer like he used to do to the cows. If Shadow wins, then Czernobog has to come with them on their trip. Czernobog wins the game and Shadow challenges him to a rematch, saying if Czernobog wins again, it gives him a second chance to hit Shadow over the head because he will need it since he is no longer as young and strong as he once was. Shadow wins the second game so Czernobog agrees to go with them and will hit Shadow in the head after everything is over.

Shadow and Wednesday encounter Czernobog at the House on the Rock in The Mikado room where he is seated on a bench. Czernobog proceeds with them down several corridors and through various rooms and attractions before arriving at a pizzaria-cafeteria where Mr. Nancy is seated. Wednesday leaves for the restroom while Shadow is introduced to Mr. Nancy. Once Wednesday returns, they set off again through the House on the Rock, finally reaching the Carousel Room.

The carousel goes round and round without stopping because it is meant to be admired, not ridden. Wednesday then asks Shadow to help them onto the platform where he, Czernobog, and Mr. Nancy jump on board the carousel. Shadow joins them, feeling more uneasy breaking the rules at the carousel than he did robbing the bank that morning.

Once on the carousel, each of the men select a mount with Wednesday picking a golden wolf, Czernobog choosing an armored centaur, and Nancy climbing on a roaring lion. Shadow eventually selects a tiger with an eagle's head to ride. The four men laugh and enjoy their ride on the carousel as the Blue Danube waltz plays and the lights glistened. Then, the lights go out and Shadow sees the gods.

When the lights go out on the carousel at the House on the Rock, the only illumination is from starlight as the eagle-headed tiger beneath Shadow seemed to come to life. He is able to see multiple dimensions with Mr. Nancy appearing to him in all his various forms. The creatures they rode trotted them to a wooden hall on a hill. Czernobog tells Shadow that none of it is really happening and it's all in his head. Shadow also sees Czernobog in his various forms as Wednesday steers his giant wolf over to Shadow's side and tells him his various names, leading Shadow to ask if Wednesday is Odin, which Wednesday confirms.

They enter Valaskjálf, Odin's old hall, as Mr. Nancy explains to Shadow they're in Wednesday's mind. Wednesday is upset that there aren't as many people waiting for them in the hall as he expected. Mr. Nancy steps up as the "warm-up" man and tells the crowd of Old Gods a story about how he stole Tiger's balls and blamed it on Old Monkey, which is why to this day, Tiger chases monkeys. Wednesday next stands before the people gathered. He gives them a speech about how the New Gods are growing in America and it is now time for the Old Gods to act. Mama-ji gets into an argument with Wednesday, saying they only have to wait for the New Gods to die out like the ones of the past. Wednesday tells them all they have already lost everything and he is offering them the chance to take something back. The fire burns out and the meeting ends.

After Shadow is arrested and placed in the Lakeside jail, Chief Mulligan and Officer Bute sign him over for transfer to two deputies from Lafayette County and Shadow is put into the backseat of a black town car. As they drive away, the deputies reveal themselves to be Mr. Nancy and Czernobog.

Czernobog and Mr. Nancy take Shadow to Minneapolis where they meet up with Alviss and change from the black town car to a VW bus. Alviss expresses his sympathy to Shadow and asks if the "vigil" falls on him, which Czernobog says he will not have to do.

Eventually they stop for food and gas. Mr. Nancy receives a phone call from the New Gods telling them to meet in the Center of America, neutral territory for both the Old Gods and New Gods, so they can give them back Mr. Wednesday's body.

They drive toward Lebanon, KS and the Center of America, stopping in Humansville, MO and visit a supermarket where they encounter Gwyndion who promises Mr. Nancy he'll "be there." They continue driving before another brief stop outside Cherryvale, KS. Czernobog exits the vehicle and walks to the center of a meadow where he had once been worshiped and he feasts on its residual power, rejuvenating himself.

They reach the Center of America that evening and park at the one-story motel. There is a chauffeur and a female newscaster standing outside. Media introduces herself and leads them inside where Technical Boy is waiting with Mr. Town. Mr. Town hands room keys to Mr. Nancy who passes them out to Shadow and Czernobog. Later that evening, the chauffeur has brought everyone McDonald's from Nebraska. As they eat dinner, Shadow asks when they can take Mr. Wednesday's body and is told that according to the rules, they have to wait until midnight.

It's soon close to midnight so they head to Room Five, where Wednesday's body is laid out in the middle. Town, Media, Mr. Nancy, Czernobog, and Technical Boy soon join them. Loki calls the gathering to order and asks if anyone would like to say something. Mr. Town passes, Czernobog warns that this is the start of war, and Technical Boy starts to recite a poem buy can't remember the rest of it. Shadow says that the whole situation is "pitiful" because half the people there had a hand in killing him but Shadow is still working for Wednesday. Media makes a few pithy comments about life and death before Mr. Nancy finishes off with another warning that the New Gods would pay for what they had done.

The New Gods leave and they wrap Wednesday up in sheets. Shadow carries him out to their bus, remembering his promise to Wednesday when he started working for him. Mr. Town approaches him and hands him Wednesday's glass eye, telling him that Mr. World wanted Shadow to have it. Mr. Nancy takes the wheel and they leave the Center of America, heading east.

When they reach Princeton, MO, Nancy asks Shadow where they can drop him off. Against their protests, Shadow insists that he is staying with Wednesday's body and will hold the vigil even after Czernobog and Mr. Nancy both warn him it will kill him. Even though Shadow hopes he will survive, he is willing to die because then maybe he'll finally have lived.

They drive Wednesday's body to the ASH farm in Virginia. A perfectly symmetrical silver-gray tree rises up higher than the farmhouse, identical to Wednesday's silver tie pin. There are three women of descending heights by the tree who Shadow mistakes at first for the Zorya Sisters. The tallest sister removes Wednesday's body from the bus and the three sisters place his body underneath the tree before approaching Shadow. They ask if he's the one who will mourn and hold vigil for the all-father and Shadow nods. Nancy tries again to dissuade him but Shadow holds firm. Czernobog says that Shadow needs to survive the vigil for him because he still gets to hit him on the head.

At Rock City, Czernobog, Anansi, Kali, and many others gather for their war.

After spending the night in a Motel 6, Shadow arrives in Chicago the next morning and is greeted at the brownstone by Zorya Utrennyaya who promptly tries to get him to leave again, telling him that he doesn't want to see Czernobog. They are in the middle of spring cleaning and Shadow helps Zorya Vechernyaya turn a mattress in Bielebog's room. They keep trying to get Shadow to leave but he sits and waits for Czernobog to come back.

Czernobog returns and also tries to get Shadow to come back tomorrow when Bielebog will return but eventually agrees to swing his hammer at Shadow's head as promised. He lightly taps Shadow's forehead with the hammer, saying there is blood but also gratitude and that it's been a long, long winter.

Czernobog is described as old with a gray face, narrow smile, and yellow teeth and fingers.

"The man in the dusty bathrobe was short, with iron-gray hair and craggy features. He wore gray pinstripe pants, shiny from age, and slippers. He held an unfiltered cigarette with square tipped fingers, sucking the tip while keeping it cupped in his fist - like a convict, thought Shadow, or a soldier."

Czernobog and Bielobog
Add a photo to this gallery 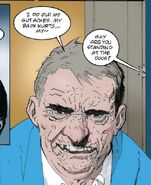 Czernobog's many faces in the Backstage

Czernobog and Alviss
Add a photo to this gallery

Retrieved from "https://americangods.fandom.com/wiki/Czernobog/Novel?oldid=15456"
Community content is available under CC-BY-SA unless otherwise noted.