Cordelia road trips across the country meeting her boss’ eccentric friends and helping him with “tech stuff,” unaware she’s caught up in a divine battle for the soul of America.

Cordelia was a whip-smart but rebellious college dropout facing mounting legal bills and student debt before Mr. Wednesday arrived in her life.[1][2] Mr. Wednesday wrangles her to his side to help with tech stuff, though she remains unaware of his divinity.[3] 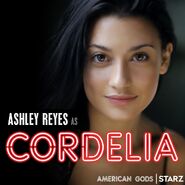