American Gods Wiki
Register
Don't have an account?
Sign In
Advertisement
in: Characters, A to Z, Novel characters,
and 2 more

Chad Mulligan is the Chief of Police in Lakeside, Wisconsin where Shadow is temporarily staying. He first appears in Chapter Ten when he offers a freezing Shadow a ride into town and introduces him to the townsfolk.

Shadow attempts to walk into Lakeside the first morning he arrives but underestimates how cold it is. Just as he approaches the bridge into Lakeside, Chief of Police Chad Mulligan pulls up next to him and offers him a ride into town. He takes Shadow to Mabel's diner for breakfast and Mulligan offers to help Shadow find a car. He then takes Shadow shopping for clothes and groceries as they talk about Mike Ainsel's "uncle" Emerson. Mulligan then drops Shadow off to buy a purple jeep from Missy Gunther.

Chad Mulligan offers Shadow a ride. They drive around and chat about Marge Olsen. Mulligan tells Shadow how Marge's oldest son, Sandy, vanished last year and was most likely kidnapped by his father.

A couple of days later, Mulligan stops by to tell Shadow that Alison McGovern, the girl from the bus, has gone missing. Shadow joins him in the search party for her, which ends when it gets too cold.

Shadow runs into Mulligan at the barber shop and they head over to Mabel's. Mulligan tells him about a distant, recently widowed cousin who has been calling him frequently. Shadow encourages him to pursue the potential relationship.

Shadow and Sam head to the bar in Lakeside, the Buck Stops Here. Chad Mulligan is at the bar with his distant cousin, who turns out to be Audrey Burton. She screams and causes a scene when she sees Shadow and orders for him to be arrested for murdering the two Spooks. Sam tells Audrey off before kissing Shadow to show she's on his side. Mulligan takes Shadow outside and sends Audrey away before driving Shadow to his office. He lets Shadow use his phone and Shadow calls Ibis and Jacquel Funeral Parlor.

Mulligan takes him down the hall to the Lumber County jail where Shadow is processed by Office Liz Bute and left to wait for three hours until the Lafayette Sheriff's Department comes to pick him up. When the deputies arrive, Mulligan and Bute sign him over and Shadow is put into the backseat of a black town car. As they drive away, the deputies reveal themselves to be Mr. Nancy and Czernobog.

After Shadow returns to Lakeside and confronts Hinzelmann about the missing children, Mulligan reveals he's been listening to the entire conversation for the last ten minutes. Hinzelmann panics and throws a red hot poker at Mulligan as he tries to flee with Mulligan shooting him dead in one shot. Shadow helps Mulligan start a fire to cover Hinzelmann's death before Mulligan drives Shadow back to his car at the lake. Shadow removes Mulligan's memories of the day and nudges him toward Marguerite Olsen.

Chad is a lanky man with a "round, apple-belly gut." 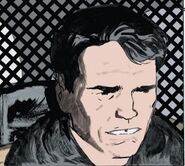 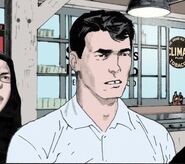