American Gods Wiki
Register
Don't have an account?
Sign In
Advertisement
in: Characters, A to Z, Novel characters, Series characters

The Buffalo, also known as the Buffalo Man or Buffalo Woman, is a mysterious entity manifesting as a buffalo or a humanoid with the head of a buffalo.They are a personification of the American land.

In the series, he is a white Buffalo with fire coming out of his eyes. He appears to dwell in Shadow's dream world and gives advice to Shadow, telling him to "believe."

Shadow falls asleep and dreams of the place were he is surrounded by human bones and dead trees. He walks toward the middle where there is one massive, dead tree. He sees a white buffalo approaching him with its eyes aflame. As he backs away, the buffalo tells him to "believe" and Shadow wakes up.

In Mr. Ibis's recounting of the arrival of a Siberian tribe to America during the Pleistocene, the Buffalo has been worshiped by the earliest arrivals to North America. He is the patron god of an endemic tribe, and Atsula, the high priest of a recently arrived tribe, has to sacrifice herself to him to allow her people's survival.

Shadow dreams of digging out from a pile of skulls and climbing to the top of it where he encounters a massive tree. The Buffalo approaches him and he is surrounded by the smoke from its eyes. He awakens in the passenger seat of Betty with Wednesday driving them to Kentucky.

When Shadow tries to leave the green house he is yanked back by Yggdrasill into his dream world were the Buffalo watches him learn of his origins through his memories.

Shadow frequently encounters the Buffalo Man in his dreams. Shadow dreams that he is deep below the earth in a primordial cave, talking to the Buffalo across a campfire and can hear the Buffalo's words, but the Buffalo's mouth does not move when he speaks. In these dreams, he often gives Shadow advice or leaves him with a question to ponder, such as "What are gods?" He is often accompanied by Whiskey Jack. Near the end of the story, Shadow comes across him and directly asks who he is. The Buffalo replies, "I am the land."

Samantha Black Crow has also encountered a female version of the Buffalo in her dreams. 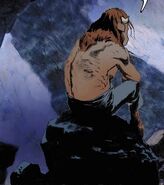 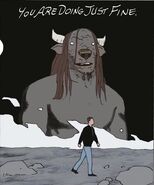