American Gods Wiki
Register
Don't have an account?
Sign In
Advertisement
in: Characters, A to Z, Gallery,
and 4 more

Bilquis is one of the Old Gods. As an ancient goddess of love who craves the worship she inspired in eras long gone, she is eager to find that same relevance in today's world.

Bilquis is the legendary Queen of Sheba who ruled the city of Ma’rib in Yemen thousands of years ago where she was worshiped by her people in nocturnal rituals of orgiastic nature.

Bilquis is in a bar for a date with a man she met online. She takes him back to her place and into her bedroom. They undress and he tells her she's perfect. She asks if he doesn't think she looks "spent" and he replies that she is sexy. They begin to have sex with Bilquis guiding him. She asks him to worship her with his words and body and to pray to her. He worships her with his words as she starts to ride him. He prays to her and exalts her as she keeps riding him, swallowing him from the waist down, telling him not to stop and to give her his body and his life. She finishes consuming him with her vagina and relaxes, rejuvenated from his willing sacrifice.

"The Secret of Spoons"[]

Bilquis goes out on numerous dates, consuming men and women with her vagina as she rejuvenates and refreshes herself with their willing self-sacrifices. In spite of the worship she receives, she is unhappy. She visits an exhibit of antiquities, passing by a statue of herself as the Queen of Sheba. She sees her body jewelry laid out in a glass case and an image forms under the red velvet as if someone were wearing it.

Bilquis makes her way through a disco club where she encounters a young woman and asks her to dance. Men with guns storm the club and destroy it as people flee in terror. Bilquis is saved by the young woman.

Bilquis is on a flight to America seated several rows behind the woman who helped her escape the disco. She asks the man seated next to her where the bathroom is at and takes him into the bathroom with her. She returns to her row alone. The flight attendant gives her a "Hollywood, California" postcard.

Bilquis visits the woman she followed to America as she lies dying in the hospital of AIDS.

Bilquis has been reduced to homelessness and is pushing a cart along the street when she stops in front of an Ethiopian restaurant named Marib. The menus have drawings of Bilquis on the front, reminding her she was once a queen. The TV in the restaurant shows live footage of her ancient temple in Yemen being destroyed by ISIS. Later, as she is sleeping on the street, Technical Boy pulls up to offer her a new altar, giving her a cell phone. She scrolls through an online dating app, and sees a picture of herself at her most beautiful.

Bilquis once again visits the museum housing a collection of her artifacts. She ignores a phone call from "The Man" (Technical Boy). He appears behind her and scolds her for avoiding him. He is calling in the favor she owes him.

Bilquis is on a bus trip to the House on the Rock in Wisconsin and invites the man seated next to her to the bathroom.

Bilquis enters the House on the Rock as it is closing and feeds on one of the employees. She wanders through the deserted building and encounters the Jinn. They greet each other and Bilquis reveals she was not invited. Salim arrives, surprising the Jinn.

Inside the House on the Rock, the Jinn asks why Salim followed him when he could have gone anywhere else and done anything he wanted. He tells Salim to leave but Salim replies back, "I do not grant wishes." They are interrupted by Wednesday's entrance. Wednesday asks the Jinn how many have arrived. The Jinn replies there are about a dozen plus Bilquis, who was not invited. Wednesday and Nancy take tokens from the Jinn and the Jinn offers Shadow a token as well but he does not let Laura and Mad Sweeney through.

Bilquis greets Nancy before confronting Wednesday for not inviting her when she is an Old God. Wednesday acquiesces and invites her to "consult the Norns." She inserts a token into a machine where Selina, a fortune telling mannequin, moves around to music before a card is dropped into a slot below for her to retrieve. Wednesday inserts his token next and chortles when he receives his card, causing Shadow to ask what it is. He won't reveal what it says because, "a man's fortune is his own." Shadow inserts his token and receives his card, reading it out loud:

They continue deeper into the House on the Rock before Wednesday splits off on his own. In a room housing the Chalet of the Raven, Shadow plays with the silver coin Zorya Polunochnaya gave him while Bilquis inspects him. Nancy reveals that when he made Shadow his suit, he also got a measurement of Shadow's life and how he was bullied for being little until he was fifteen and bulked up and grew a few inches. He mentions that Shadow reminds him of his stupid son. Shadow thanks him for the compliment of comparing him to a member of his family.

Wednesday leads the group through a hall full of beer steins as he explains the immense power contained within roadside attractions in America. They arrive at the Carousel Room and Wednesday asks Shadow to feel the power. As the carousel spins round and round, the Old Gods reappear on the carousel. Nancy sits on a roaring lion while Wednesday invites Shadow to join them and Bilquis offers to keep him safe. Shadow climbs uneasily aboard and chooses a tiger with an Eagle's head to ride. The carousel continues to spin faster and faster and Shadow begins to enjoy himself. Wednesday's wolf mount opens up and a bright light shines forth as the carousel figurines detach and fly away into space.

Shadow awakens on a beach next to human skulls and where a Norse ship has dropped anchor. Bilquis tells him he is "Backstage" in Wednesday's memories. As Bilquis leads him up to Odin's Hall, she explains how if the meeting had been held in Bilquis' mind, it would be a warmer experience with hanging gardens and ziggurats. Once within the hall, Shadow is able to see the gods in their various non-human forms: from Odin, Bilquis, Czernobog, the Zorya sisters, and Anansi to Ame-No Uzeme, Ahura Mazda, the Lion-god, and Frau Holle. Anansi calls everyone around for a story about being at constant war with the New Gods. Odin speaks, reminding them how people brought the gods, including everyone present, with them to America. The Old Gods have been abandoned as the "true believers" either died or stopped believing. They are only getting by as they are replaced by the New Gods, who now want to destroy them.

Mama-ji interrupts, saying that she has seen New Gods rise and fall and they should wait them out. She does not see any of the battles that Odin claims are happening. Bilquis defends Odin, explaining how the New Gods have more followers, more attention, and more power, however, it is not a bad thing. She has been given the tools of the New Gods and warns them they need to evolve or die. Shadow speaks out that he believes Odin. He has lost everyone and everything but he is regaining his belief and faith because of Odin. If they help Odin, they can be worthy of their believers.

In the Black briar bunker, Technical Boy complains that Mr. World sent Bilquis when he could have tracked them himself. Mr. World explains that he sent her because he needs Bilquis to be complicit with the New Gods. Mr. World picks up a red telephone and says, "recover the package."

At a Motel America diner, Wednesday pours mead as the Old Gods feast and socialize. Bilquis approaches Laura, calling her beautiful and asking what she is. Laura warns Bilquis that Laura will kill her if she hurts her husband. Bilquis leans forward and gives her a lingering kiss before leaving the restaurant.

In the Black Briar bunker, Mr. World pours liquor from a decanter and brings it over to Bilquis while the Caretaker continues monitoring the "eyes of Argus". Mr. World commiserates with Bilquis that none of the Old Gods joined her. She blames his attack on the diner for pushing the Old Gods into joining Wednesday's side. Bilquis refuses to join his war as she is a love goddess and "love and war may sit on opposite sides of the coin but only so they may never meet." Mr. World warns her that she must choose a side or be trampled by both.

For Season One, Yetide Badaki describes Bilquis as an ancient goddess of love trying to find her relevance in the present day with online dating, an "extraordinary character in an ordinary situation" and trying to go through day by day. In a time where millenials have less and less sex, and less and less intimacy, she is starving and basically feeding off "empty calories", since most of what is sold as "love" today is actually "empty containers", leaving you feeling empty no matter how much you buy. [1]

Bilquis carries a regal essence everywhere she goes and possesses divine beauty. She has dark brown skin, full lips, with round dark colored eyes. Bilquis's beauty enchants all. Men, women, and kings - it made no difference. They all fall under the thrall of the legendary queen. In her prime Bilquis styled her hair into what resembled a chalice or even a crown, with finery expected of a goddess and queen. In modern times Bilquis remains as beautiful as ever. She styles her hair in loose curls, and when she's not seducing mortals in loose shawls or robes Bilquis is seen wearing elegant dresses with heels. When deprived of worship Bilquis is physically malnourished with her skin distinctively looking dry; hence, when given a sufficient amount of sacrifices she becomes radiant.

Technical Boy and Bilquis in Come to Jesus 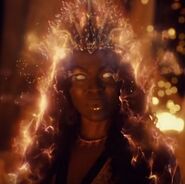 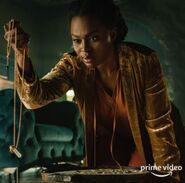 Concept art of Bilquis gown at the Barran temple 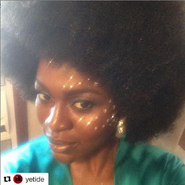 Yetide Badaki posting pictures of herself as "Disco Bilquis"

Season Two BTS at House on the Rock

Bilquis at House on the Rock 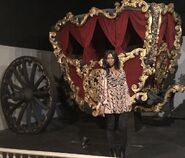 Yetide Badaki as Bilquis at House on the Rock 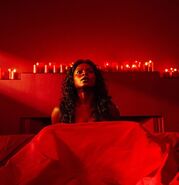