American Gods Wiki
Register
Don't have an account?
Sign In
Advertisement
in: Characters, A to Z, Novel characters, Old Gods

Bast is one of the Old Gods, and a supporting character in American Gods. She lives as a cat in Ibis and Jacquel Funeral Parlor.

Mr. Ibis uses a praxinoscope to tell Bast the tale of Argus, symbolized by a peacock. Zeus became lovers with the river nymph, Io, so Hera turned her into a heifer and sent Argus to protect her. Zeus sent Hermes to kill Argus and eventually Argus was reborn in America as the God of Surveillance.

"The Greatest Story Ever Told"[]

Shadow is asleep in Ibis and Jacquel Funeral Parlor. He hears a cat meow and a naked woman approaches him, telling him she is glad he came. She pushes him back onto the bed. Shadow protests that Laura will kill her. She passionately kisses him anyway, explaining that Laura won't kill her. She licks at the wounds he suffered over the last few weeks and begins to ride him. She scratches at his chest and his back, telling him to let it happen. They finish having sex and she tells him to rest and let it go. He falls back asleep. Shadow wakes up the next morning to Bast the cat at the foot of his bed. He walks naked over to the mirror and sees that his wounds have completely healed but he has been left with claw marks on his chest and back.

Mr. Ibis is preparing Lila Goodchild's body for burial when Shadow walks in. Ibis asks if Shadow slept well. Shadow hesitates and stutters before replying that he did. Bast the cat enters and Ibis communicates with her via whistle. Shadow asks if anyone else is around and Ibis takes it to mean he is asking after Laura.

Mr. Ibis is working on Lila's body in the preparation room of the funeral parlor when Bilquis arrives. They greet each other with affection before Bast the cat and Mr. Nancy enter. Nancy confronts Bilquis for initially siding with Mr. World and confronts Ibis for not riding the carousel because he wants peace. Nancy wants to know the trade-off for joining the New Gods. Nancy understands oppression, exploitation, and human trafficking and how it has only evolved in America from slavery to prison, police brutality, and other traumas. Ibis acknowledges that he hears every voice and records their names from a bird's-eye view while Bilquis claims that their suffering is timeless and not sacred. Nancy tells them they cannot sit out this war and as African gods, it is on them to fight for themselves. If a Black lady had died instead of Zorya Vechernyaya, Wednesday and Czernobog would not be seeking vengeance. Bilquis is moved by Nancy's speech and kisses him deeply while Ibis looks on uncomfortably before proposing they have a drink.

When Shadow first arrives in Cairo, IL, he meets a cat (Bast), a talking dog (Mr. Jacquel) and a man in gold-rimmed spectacles (Mr. Ibis) who take him to Ibis and Jacquel family funeral parlor.

While staying at Ibis and Jacquel Funeral Parlor, at one point Shadow contemplates suicide but is stopped by Jacquel and Ibis's cat, who seems to miraculously open doors. One night, Shadow has a very vivid sex dream. The dream takes place in two settings: a bridge above a stream, and his old prison cell. The woman is very cat-like and seductive: she wears an animal-print skirt, she purrs, she scratches him with long nails, and her tongue is rough, like a cat's, while the rest of her skin is soft. Water permeates the dream: the stream has small waves that seem to be reaching toward Shadow, and she rides him like a wave. Shadow warns her about Laura, saying that she will kill him, but she is not scared, and brings him to an amazing and much-needed orgasm. The orgasm is a relief, and he sleeps well afterwards. In the morning, he realizes the dream was not entirely a dream, as he is nude, the bruises on his body are healed, and he is covered in cat-claw scratches.

While staying in Lakeside, one morning, Shadow goes on a scenic walk east on Country Q that Mabel recommended and encounters a cat who hisses at something behind him, who turns out to be Laura.

When Shadow is arrested by Chad Mulligan in Lakeside, he lets Shadow use his phone and Shadow calls Ibis and Jacquel Funeral Parlor. Mr. Ibis answers and Shadow asks him to track down Wednesday. Bast comes on the phone next and tells him to take care. Ibis tells Shadow he can't get a hold of Wednesday but he left a message with Mr. Nancy and wishes him luck.

As Shadow travels through the Underworld, he reaches a bend in the path where he encounters Bast in human form. She points to three paths, telling him one way will make him wise, one will make him whole, and one will kill him. He tells her he is already dead and she replies that death is relative. He doesn't know which way to choose so she says she can choose for him if he trusts her but it will cost him his heart. She reaches inside his chest and pulls it out, closing her hand around it until it is gone. She tells him to take the middle path and to keep moving because the clock is ticking while the gods are gathering on the Mountain preparing for war.

The path splits again and he recognizes one path as the Hall of Forgotten Gods he dreamed about once before. He chooses another path but it doesn't seem right either, so he heads down the center path as Bast had directed him. A splashing noise reaches Shadow in the darkness and he waits on the shore as Mr. Ibis rows a boat over. As they row back to the other side, Ibis tells Shadow he is his psychopomp, there to escort him from the world of the living to the world of the dead. Even though Shadow didn't believe in the Egyptian gods, they believed in him and are now there to guide him on his way.

They disembark and Ibis takes Shadow to Anubis to be dissected and judged, leaving Shadow feeling painfully exposed as all of his sins are examined. Anubis asks for Shadow's heart and Bast passes it to Ibis. If Shadow's heart is too heavy, it will be fed to Ammet, the Eater of Souls. Anubis brings out a pair of golden scales and places a feather on one side and Shadow's heart on the other as Ammet lurks in the shadows, waiting. The scale balances out and Shadow is allowed to choose where to go next. Shadow asks for no heaven or hell but to simply rest and let it end. Mr. Jacquel opens a door to Nothing for Shadow and he walks through joyously.

Bast first appears as a small brown cat who is openly affectionate with Shadow, with Shadow leaving the door open to his room so she can come and go as she pleases.

In her human form, her skin is deep dark brown and satin-smooth, her nails are needle-sharp, and her tongue is sandpaper-rough. Her eyes are the color of golden-amber and her pupils are vertical slits. 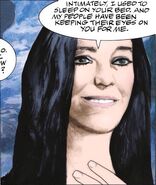 Bast in the afterlife

Bast, or Bastet, was a goddess of Ancient Egypt associated with cats.

One of the archetypes of the Egyptian mythology was the one of the "dual daughter of Ra". A myth claims that Ra, or Re, the Sun god and supreme ruler of the universe, had a daughter that was also the embodiment of his "eye" (the manifestation of his light and solar power), and that this daughter had two sides: one ferocious, fearsome and destructive side representing the dangerous side of the Sun's power (fires, heat, fever, burns) ; and one peaceful, caring and kind side representing the benevolence of the Sun (source of light and life). The first was the goddess fighting the forces of darkness and chaos, the second the goddess maintaining and easing the rule of the Sun. Several goddesses were thought to represent this archetype, the chief four among them being Tefnout, Hathor, Sekhmet and Bastet.

Bastet was often paired up with Sekhmet, the lioness goddess of wrath and war (the destructive side of Ra's eye). Their association was so strong that it was believed Bast was merely Sekhmet when appeased, the same way that Sekhmet was merely an angered Bast, the goddesses being the two faces of a same entity. Represented in her most primitive form as a woman with a lioness head holding a scepter and an ankh cross, Bast's most common and popular depiction was the one of a jeweled cat, or of a woman with the head of a cat. Bast represented the benevolent side of the Eye of Ra: she was a goddess of peace, tranquility and rest, very popular among Egyptians (especially women), and said to protect the homes and houses. Her main center of worship was the town of Per-Bastet ("House of Bastet") in the Delta, the town that the Greek later named Bubastis. [1]

Bast was also often compared and associated with her "sister" Hathor, a cow-goddess of joy and beauty, daughter of Ra and another embodiment of the benevolent side of the Sun's Eye. Just like Hathor, Bast was a goddess associated with music and dances: she was frequently represented holding a sistrum or another musical instrument, and was celebrated in Bubastis by musics, dances, sexual celebrations and alcohol consumption (drunkness was thought to prevent Bast from becoming the ferocious Sekhmet). Another common point between Hathor and Bast is their role as goddesses of love, but while Hathor is the goddess of romantic and sexual love, Bastet is rather the goddess of maternal and familial love. She was often represented as a mother-cat breast-feeding her kittens, and it was believed she presided over the births and protected the newborns. It was a common protective ritual to cut a baby on the arm and drop in the wound a bit of cat's blood. She was a nurturing and protective goddess said to stop epidemics and protect men against evil spirits. [2].

The worship of cats was great in Ancient Egypt. At first domesticated in order to hunt rats, protect the crops and prevent diseases, these felines quickly became divine symbols, treated with utmost care. When the cat of a house died, the entire household grieved ; when it was the cat of a temple, it was the entire town population that grieved. The cats also had the honor of being mummified. In fact, Bast's worship ended up overshadowing the one of Sekhmet, to the point that most of the lioness statues in temples were replaced by cat statues. [3].

When it became a tradition to associate each god with a wife and a child to create a divine triad, Bast was identified as the wife of Ptah, the creator god of craftsmen, and the mother of Maahes, a god of war and weather. [4] Some said that she was also the mother of Nefertem, god of resurrection and immortality (even though Nefertem is usually seen as son of Sekhmet) . When the Greeks identified the Egyptian gods with the Greek ones, they associated Bast with Artemis, their goddess of hunting and wild nature. It is believed that the Greeks did so due to mixing Bast with the lioness goddesses Tefnout and Sekhmet. [5]