Backstage is a location in American Gods. It is an alternate plane where the gods traverse. It is where Mr. Wednesday holds his meeting with the Old Gods at the House on the Rock. Later, he takes Shadow on a "shortcut" through Backstage while trying to get away from the Spooks. The Battle of Gods at Rock City also takes place here.

Shadow, Mr. Wednesday, Czernobog, and Mr. Nancy arrive at the Carousel Room at the House on the Rock. The carousel goes round and round without stopping because it is meant to be admired, not ridden. Wednesday then asks Shadow to help them onto the platform where he, Czernobog, and Mr. Nancy jump on board the carousel. Shadow joins them, feeling more uneasy breaking the rules at the carousel than he did robbing the bank that morning.

Once on the carousel, each of the men select a mount with Wednesday picking a golden wolf, Czernobog choosing an armored centaur, and Nancy climbing on a roaring lion. Shadow eventually selects a tiger with an eagle's head to ride. The four men laugh and enjoy their ride on the carousel as the Blue Danube waltz plays and the lights glistened. Then, the lights go out and Shadow sees the gods.

When the lights go out on the carousel at the House on the Rock, the only illumination is from starlight as the eagle-headed tiger beneath Shadow seems to come to life. He is able to see multiple dimensions with Mr. Nancy appearing to him in all his various forms. The creatures they're now riding trot them to a wooden hall on a hill. Czernobog tells Shadow that none of it is really happening and it's all in his head. Shadow also sees Czernobog in his various forms as Wednesday steers his giant wolf over to Shadow's side and tells him his various names, leading Shadow to ask if Wednesday is Odin, which Wednesday confirms.

They enter Valaskjálf, Odin's old hall, as Mr. Nancy explains to Shadow they're in Wednesday's mind. Wednesday is upset that there aren't as many people waiting for them in the hall as he expected. Mr. Nancy steps up as the "warm-up" man and tells the crowd of Old Gods a story about how he stole Tiger's balls and blamed it on Old Monkey, which is why to this day, Tiger chases monkeys. Wednesday next stands before the people gathered. He gives them a speech about how the New Gods are growing in America and it is now time for the Old Gods to act. Mama-ji gets into an argument with Wednesday, saying they only have to wait for the New Gods to die out like the ones of the past. Wednesday tells them all they have already lost everything and he is offering them the chance to take something back.

The fire burns out and the meeting ends. Shadow asks Mr. Nancy what happens next and Nancy says Wednesday buys them all dinner and will work them one-by-one over to his side. They are suddenly back in the Carousel Room and Wednesday is talking to what looks to be a group of tourists. Wednesday leads them out of the House on the Rock as Shadow asks Nancy if it really happened. Nancy replies, "Heck, nobody's allowed to ride the carousel. Didn't you see the signs? Now hush."

They have entered a realm that Wednesday later calls "Backstage" and can no longer be seen by the Spooks. They get out of the Winnebago to walk and Shadow spots a mechanical spider next to a pile of bones and candles at the bottom of the hill. He falls down the hill, landing between the spider and the bones and accidentally touches a thighbone.

Shadow is transported into one of the Spooks, Mr. Town's, head. Town calls Mr. World to tell him they lost Shadow and Wednesday. He is angry because he thinks Shadow is the one who killed Mr. Wood and Mr. Stone back at the railroad car. Shadow recognizes Mr. World's voice from somewhere but can't place it. Mr. World complains about scheduling a policy meeting and tells Town to get back there and that they can try to get Shadow and Wednesday again later.

Wednesday pries the bone out of Shadow's hand and Shadow is Backstage again and they begin walking once more. Wednesday explains that Backstage is a shortcut and is like being behind the scenes at a theatre. The spider is like a search engine, which is why Shadow could see into Town's mind. As they keep walking, Shadow starts to feel sicker and sicker. Wednesday gives him something to drink to help fortify him, telling him it's not good to be walking around Backstage for too long.

Wednesday leads Shadow out of Backstage and back into the regular world where they arrive at a mobile home and encounter Whiskey Jack and John Chapman. They eat dinner while they discuss the oncoming war between the Old Gods and the New Gods with both Chapman and Whiskey Jack refusing to join either side.

Whiskey Jack starts talking to Shadow about death and Shadow's dreams and Thunderbirds. Whiskey Jack brings up Laura's not-dead state and the Buffalo and offers to help when Shadow finds his "tribe." Whiskey Jack then offers to trade his nephew's '81 Buick for Wednesday's Winnebago they left Backstage. As Chapman leaves with Shadow and Wednesday, Whiskey Jack tells Wednesday to never come back.

They walk into town and find Harry Bluejay at the rec hall and get the keys for the Buick. They drop Chapman off in Sioux Falls before stopping at a restaurant outside St. Paul. Shadow discovers the date is Valentine's Day with Wednesday telling him they walked almost a whole month while Backstage.

When Shadow wants to join Mr. Nancy and Czernobog in the upcoming battle against the New Gods, they tell Shadow that it will take place somewhere he cannot go and cannot touch, "in the hearts and the minds of the people."

On the top of Lookout Mountain, is one of the biggest tourist attractions known as Rock City. It is here where the Old and New Gods gather from all across America waiting for the oncoming conflict. Technical Boy roams among them, searching for Mr. World.

Mr. Town drives around the back roads of Virginia searching for the Ashtree Farm. Mr. World has ordered him to cut off a stick from the World Tree but to leave Shadow alone and not turn him into a martyr. Town finds the tree and takes a piss on it before grabbing a ladder and climbing up the tree. He hacks off a small branch for Mr. World and starts to climb back down. He jabs the stick at Shadow and imagines twisting it in his guts before he finishes climbing down the tree. He returns the ladder to the farmhouse and briefly imagines he sees the Norns seated there before returning to his Ford Explorer. He discovers he was up the tree for eight hours just as Shadow's side begins to bleed black.

Easter watches the crowd of gods who have gathered at Lookout Mountain. Macha of the Morrigans approaches her and tells her that she can smell in the air that the battle will start soon. A hawk circles overhead before dropping down to the grass and appearing as Horus. He asks Easter to come with him to the Tree to help Shadow who has been stabbed. Easter tells him she can't abandon the battle but Horus insists that if Shadow is gone forever then it won't matter who wins the battle.

Technical Boy finds Mr. World in the Rainbow Room of Rock City. Technical Boy has found himself troubled after having killed Bilquis and asks why they need to fight the Old Gods when they can just wait around for them to die out anyway. Mr. World tells him it is because he doesn't have all the information as his mouth twists into Loki's. He explains to Technical Boy that he is waiting for the stick from the World Tree so he can throw it over the battle, turning it into a spear as he dedicates the battle to Odin in order to gain power. He proceeds to show Technical Boy what he means by stabbing Technical Boy through his chin to his brain as he says, "I dedicate this death to Odin." He hides the body and a little while later, a voice from the shadows tells him it's a "good start."

At Rock City, Czernobog, Anansi, Kali, and many others continue to gather for their war.

Easter arrives at the World Tree with Horus. They get Shadow down off the tree and Easter encourages Horus to help her warm Shadow up by flying into the sky and removing the clouds from the sun. Easter breathes into Shadow's lungs and gently kisses his face as his side wound bleeds red slightly before stopping. She tells Shadow it's time to get up and he awakens in confusion. She apologizes for bringing him back after he was done but that was what she had to do. Now it is his turn to do what he must do.

The gods start marching up a hill at Rock City and a sniper takes out a kitsune, starting a skirmish.

Shadow arrives in Rock City and confronts Mr. World and Odin. He leaves to find Laura and wonders at the emptiness of Rock City before realizing the battle is being fought Backstage. He shifts his perspective and sees the "moment of the storm" with the Old and New gods readying themselves for the oncoming war. He enters the center of the arena and hears the Buffalo Man's voice encouraging him. Shadow tells the gods that it's not a war and wasn't intended to be a war. He exposes Wednesday's and Loki's plan to con the gods in a game of "Let's You and Him Fight." The winning and losing don't matter because only the deaths matter since that is what gives Loki and Wednesday their power. Shadow finishes up by saying he'd rather be human than a god because humans keep going regardless of whether or not anyone believes in them. The Old and New gods begin disbanding, realizing they've been had. Mr. Nancy tells Shadow he is proud and they exit from Backstage. There are several gods injured from the initial skirmish and helicopters come to clean up the mess left behind.

Hoard of the Sun[]

Mad Sweeney's version of Backstage is through his hoard. 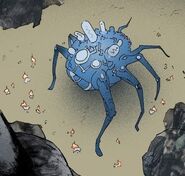