Outside of the Old Gods and the New Gods, North America is home to a wide array of supernatural beings native to its land.

These entities were born out of the belief and legends of the Indigenous American population, however they do not identify as gods. As Whiskey Jack says, America is a "bad land" for the gods, and thus the Native Americans did not create deities but rather "culture heroes" and "creator spirits". They do not need worship to survive, and are tied to the American land the same way the Original gods are tied to their homelands: Whiskey Jack explains that the Native Americans treated the land as their church and thus the native American entities will be here as long as the American land is here.

In Chapter Eighteen, Whiskey Jack mentions Coyote as an example of how Native American people did not create gods nor worshiped their spirits. According to Whiskey Jack, nobody was going to worship Coyote due to how stupid he is: "He made love to Porcupine Woman and got his dick shot through with more needles than a pincushion. He’d argue with rocks and the rocks would win."

Coyote is a creator spirit and trickster hero found in numerous cultures of the indigenous people of North America. [1]

In Chapter Seventeen, it is mentioned that two ageless Chickamauga women walk among the ranks of the Old Gods at Rock City, wearing oil-stained bluejeans and battered leather jackets, watching the deities prepare for battle, sometimes pointing at them and shaking their heads. It is also mentioned that they do not intend to take part in the imminent fight opposing the Old and New Gods.

In Chapter Thirteen's Coming to America, it is explained that when the first humans came to North America, after abandoning their Siberian gods, they quickly formed tribes and chose new totems among the fauna of the land: "ravens and foxes and ground sloths and great cats and buffalo, each a beast that marked a tribe's identity". The Coming to America ends by mentionning that of these tribes, the ones of the raven and the fox grew to be powerful in the land.

However these first totems are also explicitely described as gods. Given Whiskey Jack's comments about Native Americans and gods in Chapter Eighteen, it is likely that the first people of North America discovered later that the land was not good for gods and abandoned them to turn towards creator spirits and culture heroes.

It is mentioned that the remains of Nunyunnini were destroyed by the members of a raven tribe: since ravens were such jealous gods, they feared that taking these sacred objects to own their power would bring the "ill luck and malice of their own god".

In Chapter Twelve, Whiskey Jack tells Shadow the story of Fox and Wolf. Fox was the older brother, Wolf the younger brother. Fox wanted people to live forever and for death to be short, but Wolf insisted that people needed to die, else they would be too many and eat all of the food of the world. When Wolf died, he begged Fox to bring him back to life, but Fox had been convinced by Wolf's words and refused. Ever since, Fox lives "under the sun and the moon", mourning his brother forever, while Wolf rules over the world of the dead. Whiskey Jack later adds that Laura belongs to Wolf and the "dead places".

Gnaskinyan, also known as Gnaski or Crazy Buffalo, is a malevolent Lakota spirit. He is the son of Iktomi's brother, Iya, and Unk. He appears with Iktomi in "Muninn".

In Chapter Nine, during a dream, Shadow ends up on a plain of red earth, under a purple twilight sky, looking up as stars light up one by one in the sky, "much brighter and more vivid than any stars he had ever seen or imagined". He hears the crackling voice of the flame say: "Soon, they will fall. Soon they will fall and the star people will meet the earth people. There will be heroes among them, and men who will slay monsters and bring knowledge, but none of them will be gods. This is a poor place for gods."

In Chapter Eleven, Shadow dreams of the star people. He sees the stars fall on an open plain and turn into people upon touching the red earth: the men have "long black hair and high cheekbones" while the women look like Marguerite Olsen, all with "dark proud eyes". Shadow asks them to tell him about the thunderbirds and all of them turn their back to him and fade away in the landscape, all except a woman with hair "streaked white on dark gray" that points at the summer lightning in the sky, telling Shadow to ask them himself.

Figures, heroes and personifications that became part of the United-States folklore or culture, and thus manifested as supernatural entities. Their exact position among the deities of America is unclear.

While not appearing in the novel, Paul Bunyan is mentioned and described several times during Chapter Twelve. John Chapman complains about Paul Bunyan and resents him for taking up the "head space" of Americans, forcing other figures (such as himself) into obscurity. As Mr. Wednesday explains, Paul Bunyan is to American gods what NutraSweet is to sugar, an artificial being filling "the nation's myth stomach with empty calories", not born of legends or belief but rather of a "New York ad agency in 1910". Despite John Chapman's and Mr. Wednesday's disdain for him, Whiskey Jack likes Paul Bunyan, who is "okay" by him. He appreciated his ride at the Mall of America, and he doesn't mind that he never existed because it means he never cut down any tree. Though he notes that planting trees is better, and thus puts John Chapman above Paul Bunyan.

It is unclear if Paul Bunyan does exist somehow as a manifested entity, or if he is just a purely fictional figure. In real-life, Paul Bunyan is a folk hero of American and Canadian folklore, a giant lumberjack with a pet named Babe the Blue Ox. Several tall tales of extraordinary labors were attriuted to him, such as creating lakes with his footprints or the Grand Canyon with his axe. While heavily popularized by a promotional pamphlet for the Red River Lumber Company in 1916, researches trace back Paul Bunyan's history to the oral tradition of North American loggers and the folk tales of lumbercamp bunkhouses, the earliest mention of him dating back to 1904. While very popular in children literature and animated movies, the authenticity of Paul Bunyan has been heavily debated - many scholars considering him an example of "fakelore" without true folkloric roots and only popularized to target a juvenile audience. [5]

Beings and entities that predated the arrival of the first gods and humans in America. 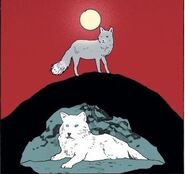 Fox and his brother Wolf

The totems of the tribes that came after the First People